Why Daily and Real-Time Music Charts Are Now Necessary 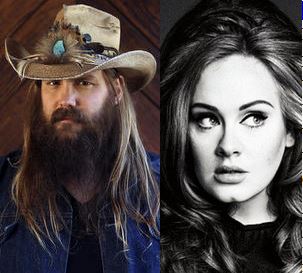 2015 has been back loaded with big events and even bigger releases that have caused renewed interest in the charts used to measure the popularity and impact of music. The problem is, in this here-and-now world, the model for how music is measured is still based around walking to a newsstand on Monday, and picking up the latest Billboard, or waiting for Tuesday when the album charts are updated online. And by that time, whatever big musical event that went down last week is already old news.

When country songwriter Chris Stapleton won big at the CMA Awards on November 4th, we witnessed one of the biggest post-award sales bumps in history. Sales for his Traveller album and the song “Tennessee Whiskey” skyrocketed. But it was left to estimates and prognostications to glean just how much the sales spike was until the new charts came out. What were the sales broken down on a daily basis so we could see just how Stapleton’s meteoric rise took shape? That information isn’t made available to the general public.

Adele’s 25 has been named the best-selling album upon its debut in American history, with sales of 3.38 million, and followed it up with another record-breaking million-plus sales week. So much for major album sales being a thing of the past. But when the new Billboard 200 sales chart was published on Monday (12-6) and was updated online Tuesday, it was already old news. Due to so much speculation and prognostication surrounding where Adele’s sales would land, Billboard didn’t wait until Monday to let the public know. As soon as everything was finalized by Billboard‘s point-of-sale tracking partner Neilsen Music on Saturday night, Billboard immediately published the information online. Previously, Billboard had started releasing some official sales stats on Sunday night to stay ahead of other publishers and public speculation.

Along with the hyper interest in the sales performance of marquee releases and fast-rising stars, Billboard and other chart managers have to worry about the growing business of estimating sales and competition from real-time charts provided by music sellers directly. Wait to release sales info until Monday, and sometimes the story is already old hat. Sites like HITS Daily Double offer fans, media, and industry a building album sales chart updated daily with estimates of sales built from point-of-sale tracking history and actual sales numbers, giving readers a fairly accurate view of what they can expect from next week’s charts many days before they’re made official. iTunes charts and rankings on Amazon update in real-time (or hourly), and more and more these measurements are being cited by labels, artists, and publicists as accomplishments as they attempt to buzz certain projects.

But in the rush to be first to report on sales numbers, accuracy can get lost, and manipulations can build into the market. To claim a #1 on the iTunes charts, all one artist or band has to do is win a given hour. Tasking fans to purchase a single or an album within a short window can result in an iTunes chart #1 that doesn’t necessarily paint an accurate picture of the true appeal of a record or single. There’s a constant effort by the industry to make artists and bands look bigger than they actually are. If someone can claim a #1 or a Top 5 sales performance, this can create enough buzz to where other consumers will jump on the bandwagon. Adele’s early estimated sales had her peaking somewhere near 2.5 million. But with all the buzz surrounding the album, she beat those estimates by nearly one million units.

iTunes only accounts for sales on iTunes. We saw what the results can be when the system is manipulated after nationally-syndicated country DJ Bobby Bones tasked his listeners to purchase country artist Chris Janson’s “Buy Me A Boat” until it shot to #1 on iTunes. Because of the interest, Janson was able to land a major label deal, and “Buy Me A Boat” secured a nationwide single release. But the event wasn’t nearly as organic as it was portrayed. It wasn’t a single catching fire under its own volition. It was the result of a powerful DJ, and a chart that is easily manipulated by a spike in sales. Another rising star in country, Kane Brown, has also been attempting to dazzle the public with big showings on iTunes and other proprietary tracking systems.

The need for transparency, and the need for daily and real-time charts from trusted sources that take into consideration the entire marketplace and not just one sales outlet to give consumers, media, and business-to-business entities a more clear and relevant picture into the true behavior of music consumers has never been more necessary. And now with so many point-of-sale and online tools for tracking sales available through companies such as Neilsen Music and MediaBase who are keeping track of consumer activity in real time, the technological leap for creating such charts is well within reach.

It doesn’t mean the weekly charts have to go away. They will still be a way to take a more broad-based, benchmark perspective on sales activity and radio play, and will also allow the balancing of sales in historical significance compared to previous years. In some ways it’s unfortunate we live in such a fast-paced and easily-manipulated environment that real-time and daily charts from trusted entities are necessary. But it may be the best way to help everyone who cares about music navigate the new paradigm with the transparency and insight only well-regulated charts can provide.