I always must start off when talking about gothic country by saying that it is not for everyone. Slim Cessna’s Auto Club is weird, weird music. It is also very very good music.

At first I didn’t know what to make of this album. In places, this is the most accessible, most non-dark music they have ever done. There are many bands that if they had put out an album like this, grumbles of “going mainstream” or “selling out” would be 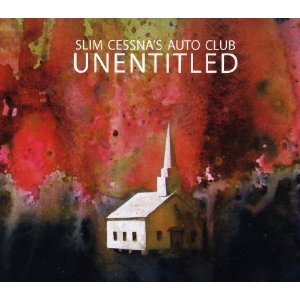 heard. But The Auto Club is so weird, so fey to begin with, being more normal actually makes them even more weird than they were before, adding to the mystique and mythos behind the band. The fact that you really have no idea what the hell is going on keeps the music interesting beyond the engaging nature of the songs themselves.

This is a country/roots based band, with standup bass, steel guitar, some banjo and even autoharp at times, but it goes much beyond that. This is the band that the one friend you have from high school that was really into The Cure will listen to and say, “You know, I was never really into country until I heard Slim Cessna.” The band itself tamps down any “what genre?” banter by simply calling themselves “American”.

The first two songs “Three Bloodhounds, Two Shepherds, One Fila Brasileiro” and “The Unballed Ballad of the New Folksinger” are pretty indicative of their back catalogue–dark tracks, like their previously-released signature songs “This Is How We Do Things in the Country” and “Americado” that have made Slim Cessna a stalwart of gothic Americana. I was fortunate to have just seen them at South by Southwest right before reviewing this album, because it reinforced how integral the live show is to The Auto Club’s music.

Fair or not, I will always lump them with Th’ Legendary Shack Shakers, in that they are wildly dynamic live, animated and engaging with the crowd. Slim Cessna employs the very rare double frontman lineup, with Slim Cessna himself and his “aw shucks” country attitude counterbalancing Jay Munly’s morose, bordering on morbid deportment. You appreciate after watching them live that chants and motions meant for the live setting are built into the song structures. These elements may not always translate recorded, but if you’ve seen them live before, they do. Just like JD Wilkes of the Shack Shakers, the faith healer/snake oil salesman mannerisms of Slim and Munly hit on something very visceral, and make the music much more than the sum of its parts, as you succumb to its trance and message.

But then out of left field on Unentitled comes the song “No Doubt About It”, that has almost a cheeky, mid-80’s pop call and answer routine going on in it. “A Smashing Indictment of Character” might sound like a dark song from the title, but the structure is of a lilting, almost Do-Wop 50’s-feeling arrangement. “Do You Know Thee Enemy” and “My Last Black Scarf” might be a little more of what normally is expected from The Auto Club, but they are also wickedly catchy songs; accessible, and infectious. This band really has an ear for what speaks to people in music from a very basic level, and then knows how to build that into songs without compromising integrity or artistic notion, even using the irony of catchiness as an artistic expression in itself. This is what makes Slim Cessna’s Auto Club one of the most engaging bands I have ever experienced, and one of the most underrated bands in American music.

And they never compromise what makes Slim Cessna so unique: the weirdness. “No Doubt About It” is catchy enough to find its way on to Top 40 radio, but the lyrics still reside in that gothic, poetry-inspired obscurity. And when I say “gothic” and “dark”, I don’t mean the “drinkin’, druggin’, Satan” stuff. Think more Edgar Alan Poe: how religious dogma and traditionalist culture intertwine with the modern-day decay of values.

But in the end the question is, is the music any good? Well yeah, it’s great. This album has been heavy in my rotation for over a week, and is showing no signs of letting up. I will say I think the first couple of tracks are a little weak, and I would have left off “Hallelujah Anyway” that appears near the end, which compromised their subtly in lyric and dragged out too long. But the heart of this album is very solid, and after a decade of making music, Slim Cessna has figured out a way to continue to keep their music fresh, relevant, and engaging: by being slightly normal for a change.

Again, this is not for everybody. For sure, there is not a lot of twang here. What is here is good music for haunted souls, and this just might be the music, or specifically the album (since it is so accessible) to turn you on to a vein of musical taste you never knew you had.

Also available on vinyl. And you can download the album booklet for free.