Album Review – The Secret Sisters’ “You Don’t Own Me Anymore”

The purest kernel of what is true country music, is pairs of family members or groups of family members singing together for the edification of each other, often in the form of ancient melodies and songs passed down through generations. In the early times of the deep South and Appalachia, there were no recording devices or radio, so families had to rely on each other for their entertainment, and the back porch was their stage.

The point of country music has always been to carry those traditions on from previous generations to the present day, and that is why some get so sideways when the term “country” is employed for music that couldn’t be farther afield from those picking parties on family farms and back porch gatherings in mountain hollers.

Luckily though, there are still plenty of artist who still carry that original approach to country music in their hearts, and by exhaling in song and harmony, they’re able to awaken ghosts and stir juices that more contemporary versions of country just fail to capture. The Secret Sisters comprised of Laura and Lydia Rogers are one of these such groups, gracing audiences with the haunting ability to recall the nascent, primitive times of country and folk music’s past with their intense and perfected harmonies, yet with stories and emotions that still feel very relevant to the modern-dwelling soul.

When it comes to neotraditional singing duos, The Secret Sisters are regarded at the very top of the discipline. However that hasn’t exactly won them the fame and comfort that is usually reserved for the esteemed and elite of a medium. Showing incredible promise early on, the sisters were able to sign a major label deal with Republic Records—something usually unheard of for an act so traditional and pure. But their early success in some ways set up their ultimate undoing. When the sales did not match the promise and critical-acclaim, they became beholden to their label more than they were to themselves, and we all know how the major label story ends more times than not. 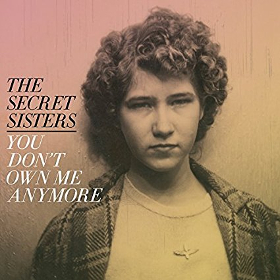 The Secret Sisters second record Put Your Needle Down released in 2014 was produced by acclaimed roots music personality T Bone Burnett. Dave Cobb—who when the album was recorded was still a semi-unknown to the greater public, yet poised to reap the rewards of producing monster records from Sturgill Simpson, Jason Isbell, and Chris Stapleton that would see the light of day after the Secret Sisters project was in the can—also had some role in the project. But what that role was apparently was mostly placated by T Bone.

With a heavy producers hand, T Bone did his worst on Put Your Needle Down, taking that pure nugget of the country music ideal The Secret Sisters embodied, and trying to turn it into modern indie rock. It was an interesting project, and undoubtedly The Secret Sisters shined through with both their songs and voices. But it set them up to fail by going away from what the duo does best, and replacing it with T Bone Burnett’s production.

Did I mention that T Bone Burnett produced this album? Okay good. Because apparently that’s a more important point than who this album is by and what it’s titled, and T Bone’s name must precede this information in any copy or conversation.

It’s not that T Bone Burnett isn’t an accomplished and successful producer. I mean hell, you can’t stick your nose anywhere in the Americana realm without finding apostles of T Bone telling you how brilliant he is. The problem though is the hype around his work has become so pervasive, I’m afraid he’s begun to believe it himself, and uses it as justification to employ an extremely heavy hand in his producer capacity, relegating the artists he works with as secondary, if not arbitrary to furthering the weight behind his own name. Or at least, that’s the way it sounds.

At the time the review was written, it was nothing more than wild-eyed speculation that conflict had brewed behind-the-scenes with The Secret Sisters’ sophomore record and T Bone Burnett. But those suspicions were apparently warranted, and staring at the idea of promoting a record they weren’t 100% sold on, the entirity of The Secret Sisters project began to enter a death spiral that it would succumb to for the next couple of years after the release.

All that’s in the past though, and now with their new home of New West Records, The Secret Sisters can get back to what they do best, which is being themselves, and shivering spines with the incredibly smooth precision of their close harmonies, and the enrapturing nature of their storytelling. But their experience with their first two records also creates the foundation for the narrative found on their new album, the aptly-titled You Don’t Own Me Anymore. Though many of the songs could be taken as that of a jilted lover looking to extricate themselves from a terrible romantic relationship—or the requests to be let go by the enslaving nature of a lover’s grasp—it happens to be the stories also meld to fit the business side of The Secret Sisters story as well.

In truth, it’s probably a little bit of both the personal and professional that comprise the inspiration for this new collection of songs produced by fellow artist Brandi Carlile, who has toured and written with the duo before, and has been one of the sisters’ staunchest champions, especially through the lean, post-major label times that saw the sisters having to take odd jobs just to stay financially afloat. As a devout student and practitioner of harmony herself, Brandi knew it would be tantamount to sin to see this project fall apart.

The very early roots of country music are intertwined with the sorrows of pining females awaiting the right beau to steal their heart, or to take it from them when offered. This theme is predominant throughout You Don’t Own Me Anymore, especially in songs like the heart-wrenching “To All The Girls Who Cry,” and the nesting “Til’ It’s Over.” But the subsequent step is the empowerment that comes through the mending of a broken heart—or the broken promises from a record label—and understanding that life goes on, and you must seize your own destiny and fate. All of these are lessons and stories that despite the vintage textures of this music, are relevant to today’s experience as they were to early rural settlers 90 years ago.

With harmonies so seductive and inspiring, you’re almost required to try them out on a cover song or two, and this album includes a Secret Sisters version of Simon & Garfunkel’s “Kathy’s Song,” which interesting was sung solo originally, not with the harmonies the duo was known for, and how Laura and Lydia sing it here.

You Don’t Own Me Anymore is sad, pleading, powerful, and poignant. Yes, it’s an album of empowerment, but the stains and bruises of repression and heartbreak are still what are top of mind, and need to be sung out through verse to have their pain expelled, similar to how settlers sang starkly of the death, loss, heartbreak and fear that surrounded them in early America.

The experience of The Secret Sisters in the music business is a nauseating, angering thing to behold, and too prevalent in a period when the classic tones of country have fallen out of favor, and so has female representation in mainstream circuits. But it also resulted in an inspired, passionate, and engaging effort that is both fetchingly vintage in its textures, while be starkly relevant to the experiences of today.

Purchase You Don’t Own Me Anymore from The Secret Sisters

Purchase You Don’t Own Me Anymore from Amazon