The Secret Sisters Shine Through In “Put Your Needle Down” 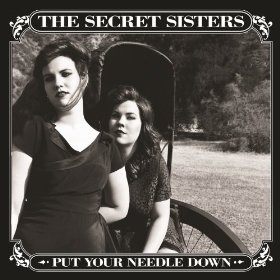 Did I mention that T Bone Burnett produced this album? Okay good. Because apparently that’s a more important point than who this album is by and what it’s titled, and T Bone’s name must precede this information in any copy or conversation.

It’s not that T Bone Burnett isn’t an accomplished and successful producer. I mean hell, you can’t stick your nose anywhere in the Americana realm without finding apostles of T Bone telling you how brilliant he is. The problem though is the hype around his work has become so pervasive, I’m afraid he’s begun to believe it himself, and uses it as justification to employ an extremely heavy hand in his producer capacity, relegating the artists he works with as secondary, if not arbitrary to furthering the weight behind his own name. Or at least, that’s the way it sounds.

No doubt T Bone Burnett is a towering man of music. There’s no denying his record. But that doesn’t give him the right, or make it right to overhaul, supplant, or bury the God-given sound, style, and talent the artists he works for are born with. People can come to T-Bone’s defense and say that this is the fate these artists chose when they signed up to work with him, but it still doesn’t erase the fact that the role of a producer is supposed to be one of a subordinate. Yes, the producer should guide and mentor, but the best producers in the business do not reshape artists into their own appointed image, they coax the best attributes already alive in artists out into the open to be captured in the recorded context. Inexplicably, with The Secret Sisters and Put Your Needle Down, T Bone Burnett does both.

This album shouldn’t be characterized as The Secret Sisters with T Bone Burnett. It should be couched as The Secret Sisters versus T Bone Burnett. Such an over-produced wall of serrated sounds punishes the ear throughout this album, it’s like trying to view the Eiffel Tower through a plague of locusts: You know there’s something very pretty and breathtaking there, but you have to fight with flailing arms to see, and you’re rarely allowed to relax and bask in its beauty.

T Bone Burnett’s production doesn’t seem to have any sense or respect for the time and place The Secret Sisters’ music naturally evokes; their music seems only the canvas for T Bone to do his worst. After the very first song, I was already tired of the ever-present tambourine on this album, which permeates this record deeper than a sheepdog’s flea dip. The tambourine rattles inside your skull like a ricocheting bullet; steadfast and unrelenting. I couldn’t get the iconic image of Will Ferrell banging on a cowbell from that famous Saturday Night Live skit out of my head, but replaced by a round, jingle-filled adult-sized death rattle. Mucky, incongruent moans of excessively chorus-inflected guitar tones burden this work like the apparitions that keep you in slow motion as you’re being pursued in a nightmare by an apex predator.

Am I being a teeny bit harsh here maybe? Is some deep-seated, unnecessary hatred for all things T Bone shining through and compromising my integrity? Perhaps, but I’ll tell you, despite the monstrosity T Bone constructed though his work on this album, I love Put Your Needle Down. I think this album is great—one captivating song after another. Why? Because no different than how the primitive artists of country had to fight through poor production situations when they were making the very first country albums, or in the 60’s when Music Row producers couldn’t resist adding strings and choruses to every damn song, or in the 80’s when everyone decided the best thing to do was get into the keyboard business and over-modulate the hell out of the drum signals, good songs, and good artists will always shine through. And that’s what The Secret Sisters are, and that’s what The Secret Sisters did on Put Your Needle Down. 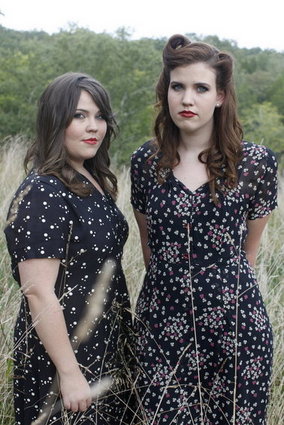 And if we’re going to smear T Bone with such colorful language, we also have to give him credit. Whether it was by accident, on purpose, or despite his best efforts, on Put Your Needle Down, the sheer, untouched genius of The Secret Sisters was unearthed in all of its dazzling beauty, and captured so splendidly despite the production woes, that you could fall under it’s spell even if you had to listen through an A-bomb blast.

Their first, self-titled album from 2010 was a selection of classic country-style songs and was produced by Dave Cobb–famous for working recently with both Jason Isbell and Sturgill Simpson on their critically-acclaimed albums—with T Bone Burnett breathing down Cobb’s neck as an “executive producer.” The Secret Sisters debut captured them in their most native environment, and in a sincere, country offering. No, my defacing of T Bone’s effort has nothing to do with him taking this album in a non-country direction; it’s that he didn’t respect the natural sound of The Secret Sisters. He could have added some rock or progressive sounds here and there, but the production effort of Put Your Needle Down was a complete whitewashing. And get this: I’m so dug in on this stance, I don’t even care if The Secret Sisters disagree.

But damn if I don’t love virtually everything The Secret Sisters themselves do on this album. Put Your Needle Down differs, and is enhanced from their first album by featuring mostly original songs. The pain and desperation captured in their performances on tracks like “Iuka” and “The Pocket Knife” evoke the plight inherent in the female condition when it’s torn and tested by the villainous priorities of men. The heights reached in the chorus of the 50’s-ish do woppy “Black And Blue” with the sisters harmonies dancing and twirling in such synchronicity, like smoke-trailed acrobats rising eloquently and unresponsive to gravity until it is impossible to discern them apart in formation, is nothing short of awe-inspiring.

One respite from T Bone the Terrible’s reign is on the subdued and simple “Lonely Island”, which if recorded 50 years ago, would be a standard of the country music song book today. It is simply a masterpiece.

And as jarring and inappropriate as the production of this album is, you even get to a point where you’re okay with it, if for no other reasons than refusing to let it ruin what was going on here beneath the layers and layers of over-production, and the fogginess that besets this album—sometimes a symptom of when a project’s mixes have been reworked too many times, especially when they are recorded on 2-inch tape to capture the “warmth” that Audiophiles love to preach about. And yes, I understand what T Bone was trying to do here: he was trying to take something classic and pure, and make it hip and progressive to appeal to a wider audience. On paper, there’s nothing wrong with that. But from a production standpoint, it didn’t work. T Bone was not the right one to try this feat with this particular project.

And why did it take nearly 1 1/2 years for this album to get to our ears? It was recorded in December of 2012, and January of 2013. I think there’s a story there in itself, if only to answer why two young women with the wind behind their backs from their first album had to wait so long for a second release.

But I’ll be damned, I really, really enjoy this album overall. Simply put, The Secret Sisters are the best female duo out there right now, and Put Your Needle Down comes highly recommended….with the obvious production caveat.

Preview & Purchase Tracks from Put Your Needle Down