Screw it all. You want to save country music? Put it on the back of the Buick City Badass Whitey Morgan along with his backing band The 78’s, and let them carry the whole damn genre.

Whitey Morgan is like the embodiment of all the rage and frustration of true country music fans channeled into one hairy human vessel. Whitey’s “Fuck Pop Country” shirts are just as famous as some of his songs, and no quarter is given when he walks out on stage to whip crowds into a honky tonk frenzy, and feed them a steady dose of hard country shit kickers. Don’t take that to mean this music is rough and reckless; quite the contrary. Along with his snarl and bark, Whitey Morgan and the 78’s put on one of the most tight shows in all of country music. It’s truly a sight to behold.

Whitey Morgan is not what you would consider a prolific recording artist, and is even less profuse when it comes to being a songwriter. That’s not a knock on the Flint, Michigan native whatsoever, it’s just not his primary concern. Whitey’s native environment is in a honky tonk, with a telecaster slung over his shoulder, and a bass drum pounding out quarter notes in his ear in front of a crowd screaming back every word. This is where his ultimate contribution to country music is measured, and his true genius shines.

Hard Times and White Lines is only Whitey’s fourth full studio record in nearly 15 years of playing, but it’s always been quality over quantity with Whitey, allowing an appetite to build among his rabid fan base before slinging them a thick slab of red meat they’ll feed off of for years to come, and that’s what he does here. Whitey doesn’t look at new records as some experimental artistic medium, or an opportunity for him to noodle around with innovative ideas that potentially may alienate his fan base. He’s not looking to reinvent himself for the adulation of media critics. He knows who he is, and what he does. He is the voice of the whiskey drunk, the working man, and the weary country music listener, and he wears that badge proudly. 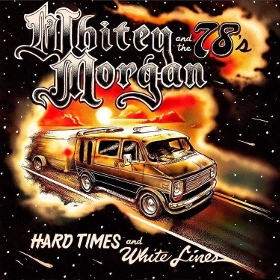 Like all of those of hearty Midwest stock, Whitey takes pride in working hard, and staying true to himself. He’s an entertainer, and doesn’t feel boxed in by his fan’s expectations, he get gratification in being able to fulfill them. Hard Times and White Lines has quite a few songs that will become live staples for years to come, and capture the troubles and fears of the common man, songs like the plodding and dark “Honky Tonk Hell,” the worrisome “What Am I Supposed To Do,” and the true-to-life “Hard To Get High.”

And nobody does a cover song like Whitey Morgan. His versions of songs like “Bad News” and “Where Do You Want It” are the definitive ones, and he takes his run at a few new ones on this record, namely ZZ Top’s “Just Got Paid,” and “Carryin’ On” that you may recognize from Dale Watson’s stable of songs.

But the standout from the entire set might be “Around Here” with it’s great cord progression and melody behind quality songwriting, or perhaps the more sentimental “Tired of the Rain.” In recent years, Whitey Morgan has moved out to the interior mountains of California, been drinking less, mountain biking more, and has a little boy running around with a rat tail haircut. He’s probably not as mean as he once was, but lucky for listeners, this hasn’t removed much of the edge from his music, only imbued some of his songs with a more thoughtful approach.

Self-produced at the Sonic Ranch outside of El Paso, some of the recordings come across as a little scratchy—something others commented on with the recent Cody Jinks record cut at the same location. But that’s also the consequence of picking up that live energy that sticks to these recordings, and comes through in the performances.

And let’s give it up for the 78’s, who deserve billing as one of the most badass backing bands in country music, due in part to keeping a consistent lineup over the last few years of Joey Spina on guitar, Brett Robinson on pedal steel, Alex Lyon on bass, Eric Savage (or Tony D) on drums, and at times Tony Martinez on acoustic guitar, or Josh Card, who has a record of his own coming out November 9th. As the hot shit road band, or in this case a killer set of studio musicians, they’re stamping out a legacy all their own. Ward Davis and Travis Meadows also contributed as songwriters to Hard Times and White Lines.

“Country” music in all of its modern incarnations and mutations will continue to devolve and disgust the folks who know what the music is supposed to be. But as long as Whitey Morgan and the 78’s are still around, they will be offering a true compass of what real country music is, and give the fans of real country a home, and a voice.