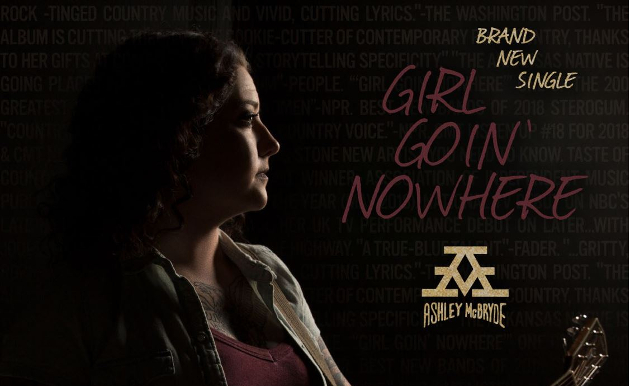 Who would have thought that your mid 30’s could be such a good time to launch a serious musical career? Perhaps to conventional wisdom and country radio, 35 is about the time to put a performer out to pasture. But for Sturgill Simpson, Jason Isbell, and Chris Stapleton, it was the moment when it all came together for them. Same is the case for Ashley McBryde. Maybe your mid 30’s is the time when the culmination of life experiences makes your songwriting especially potent, and dues paid conjoin with the wisdom of how to proceed smartly in your career, and next thing you know you’re being graced with opportunity.

Whether radio pays attention to Ashley McBryde or not, she will be okay because she’s a fighter, and a hard worker. Most importantly, she has songs. Ashley McBryde doesn’t need radio; she’s accrued fans from the sheer strength of her music. She’s not sitting at home with bated breath, waiting for radio to create a career for her, she’s been out on the road for much of 2018 making fans one at a time, selling hard tickets, and cultivating strong grassroots. Eric Church lit a spark for Ashley McBryde, but she’s stoking her own fire.

Quality songs, and success beyond radio is one of the reasons The Recording Academy decided to grace Ashley McBryde’s debut major label release Girl Going Nowhere with a Best Country Album nomination. Now it will be Grammy-nominated Ashley McBryde coming to your town, or requesting radio play her latest single, which has been deemed to be the title track from that Grammy-nominated album, impacting country radio at the beginning of the new year on January 14th.

A while ago Saving Country Music illustrated how it’s not just the closed-mindedness of radio that is resulting in so few women being played, but a lack of support by the major labels behind women and their singles. Ads placed (or a lack thereof) in country radio’s trade periodicals such as Country Aircheck and Billboard Country Update were used as examples. A positive sign for Ashley McBryde is that Warner Nashville took out a full page ad this week in Country Aircheck congratulating McBryde on her Best Country Album Grammy nomination, and underscoring the radio add date for the new single.

Running the same young women with sensible pop songs at radio hasn’t worked. Perhaps what we need is a different approach, and one which Ashley McBryde embodies in sound and spirit. She has enjoyed some success on radio. McBryde’s lead single “Little Dive Bar in Dahlonega” debuted as the most-added song on radio when it was first released, and though hitting #30 is probably not what Warner Nashville and Ashley McBryde was hoping for, that’s actually not bad for a female debut these days.

You could look at it as a negative sign that McBryde’s second single “Radioland” fizzled so quickly and failed to chart, or you could see it as positive that Warner Bros. Nashville saw it wasn’t going to fly, and pulled away from it quickly instead of leaving it and Ashley in limbo for six months as labels often do. There are many positive signs that Warner Nashville wants to make the Ashley McBryde experiment work, and that they believe in her. She probably doesn’t receive a Grammy nomination otherwise.

It’s all lining up for “Girl Goin’ Nowhere” to be a defining moment. Which is good, because it’s a good song. It’s the song that made everyone fall in love with Ashley to begin with, when they saw her debut it on the Grand Ole Opry. It’s her story set to song, and even the shallow ears of radio will find it hard not to be stirred by it.

“Girl Goin’ Nowhere’ is all about persevering through hardship, and of overcoming the doubters. But to get there, you first have to experience that hardship, and have been tested in the furnace of life to prove you pass muster. You don’t have to be in your 30’s to experience the full spectrum of problems and lessons life can throw at you, but it’s certainly more common. Mainstream country solved it’s problem of being disconnected from its roots when Chris Stapleton proved people wanted to hear someone who’d experience a little bit of life beyond the 20-something dating scene. Now it might be Ashley McBryde’s turn.

But an artist like Ashley McBryde doesn’t need radio. Stapleton, Sturgill, and Isbell proved that. It’s radio that needs an artist like Ashley McBryde. Radio shouldn’t play McBryde just because she’s a woman. They should play her because she’s real. Ultimately, “Girl Goin’ Nowhere” may fail at radio. In fact there’s a decent chance that it will given the current environment. But with a Grammy nomination, a swelling fans base, and much peer appreciation, Ashley McBryde is going somewhere regardless. The only question is if radio will be smart enough to follow.