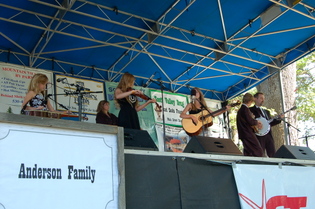 “People first, then music” is the mantra on this site, and it is such a blessing when you discover people who are just as inspiring as the music they make. Such is the case with the Anderson Family Bluegrass Band from Grass Valley, CA. Hovering above the fray of most stock family bands and stock bluegrass bands, there is a realness to their music that sets them apart. Yes, their set lists include many standards you would expect from any bluegrass band, but then they’ll completely surprise you with some spice, like Iris Dement’s “Our Town” or Hank Williams III’s “D Ray White.”

One of the great things about following a family band is you get to watch the kids mature into their proficiency and personality, and one good thing about the Anderson Family is they lack the hokiness or cultish feel you can find sometimes in the family band concept. Yes, the kids are home schooled, but they are not some unusual version of a hyper-religious family, nor are they anti-religious either. They are just people, and their music is fiercely real. They are the same on and off the stage. And the honesty of their love for each other and the music is unbelievably infectious and uplifting.

“It’s never been a ‘You have to do this’ thing,” eldest sibling and guitar player Paige Anderson explains. “It’s something the family is very passionate about, and really loves. Without music, I’m not sure what our life would be like. It seems crazy to think about that. If we weren’t passionate about it, we wouldn’t be doing it.”

For years it was easy for your attention to gravitate to Paige, the front person of the band. Female flat picking guitarists are so unbelievably rare to begin with, and Paige’s adeptness with the discipline is matched in slickness by her sublime and saccharine voice. But when seeing the Anderson Family perform live this weekend at the Scott Valley Bluegrass Festival in Etna, CA, just the improvement in all the players from previous seasons was spellbinding in its own right.

Maybe worth noting the most is how Paige’s younger sister Aimee’s singing had acquired this confidence that allowed it to meld with her siblings with such ease. Every one of the Anderson Family kids are highly proficient pickers, but Ethan, aka “Bo” Anderson may turn out to be the instrumental savant of the clan while giving up no ground in his ability to hold up his side of a harmony. The 13-year-old stole the show when he sat in with the David Thom Band on the weekend. To see a 13-year-old stand in on a full set of hard-charging bluegrass music completely unrehearsed proves that the Anderson Family are not just programmed, they are proficient way beyond their years.

And Daisy, my word. The youngest sibling drew the loudest hands of the weekend, with both her vocal prowess, holding out he part on the song “Ruby” (see below) for an inhuman amount of time, fitting right in with the challenging harmonies of her older sisters, and handling her breaks on the dobro better than most players who are her age squared. With that much talent and drive, mom Christy Anderson on upright bass, and dad Mark Anderson on banjo are just happy to keep up.

But what’s always the challenge with child performers is if the originality is going to develop. Sure, learn the modes of music and how to move your fingers as fast as you can, but will there be soul? Can you write a song? The Anderson Family already exudes a lot of originality in the way they arrange their traditionals and covers and how they handle their solo breaks, but with Paige Anderson now writing her own material, this adds a whole new dimension to the music.

Within the Anderson Family Bluegrass Band, and in Paige’s spinoff with sister Aimee and brother Ethan called “The Fearless Kin”, Paige is developing her own independent roots style with a bluegrass backbone, inspired by folks like Chuck Ragan, and Possessed by Paul James, both of which The Anderson Family has shared the stage with before.

“We met Chuck Ragan in 2008,” explains Paige. “He helped me write my first song. And ever since then I’ve been writing more and more and gravitating towards that style.”

“My plan is to pursue music because I’m passionate about it and I love it, to take a semester off just to write songs, and get my thoughts sorted out about booking gigs and all of that. And right now I’m also working on my first EP which consists of all original tunes except for one. And in January I’m going to go to a community college and take music business. I think the business aspect of music is really important, and studying it.”

She’s hoping to release the EP some time this summer.

I went to the Scott Valley Bluegrass Festival hoping to catch the Anderson Family’s set and shake their hands, and the Anderson Family ended up making me feel like one of the family for the weekend (Trigger Anderson, if you will). The music is excellent, but this is just the excuse to get you to pay attention to the profound warmth and by-gone family strength the Anderson Family conveys.

“My siblings are like my best friends,” says Paige “We’re each other’s best friends. Family to me is home, and I really value that a lot.”

Their strength and authenticity is inspiring, and stays with you after the last note has rung and the last hand has been shaken. Sure, like any family, the Anderson’s have their struggles, but they are also an example of how fulfilling life can be when your priorities are simplified into family and artistic expression. 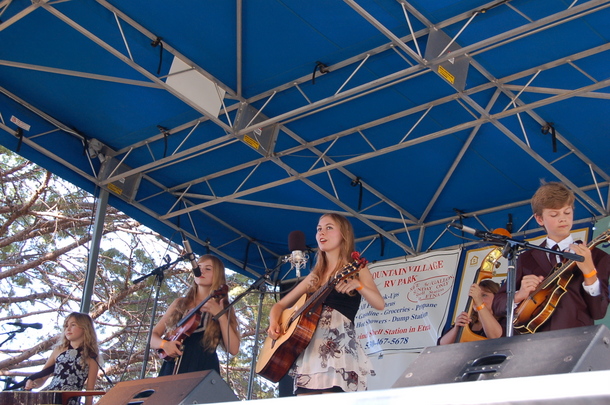 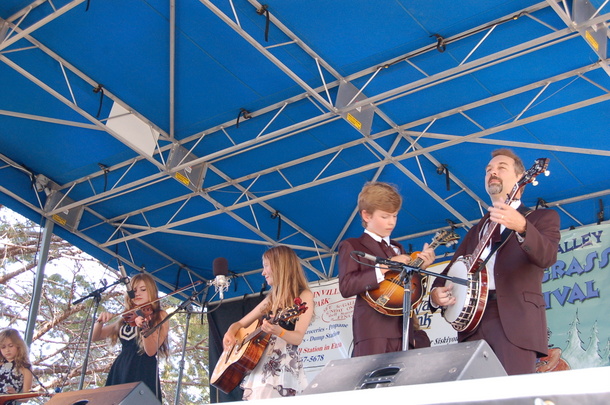 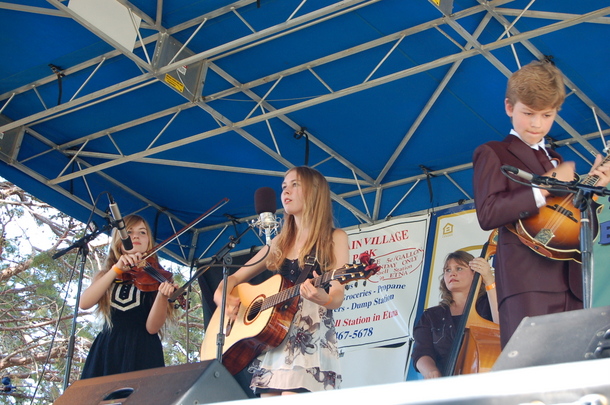