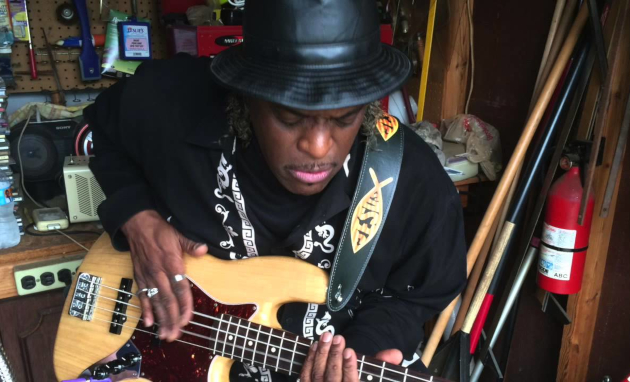 The 2nd best thing about seeing Billy Joe Shaver live behind Billy Joe Shaver himself is the band behind him, including his bass player Tony Calhoun. Big smile, big sense of humor, and one heck of a master of the lower register, he put the mustard on Billy Joe Shaver’s Outlaw style of country music for the last few years, and made crowds laugh when he would take his opportunity on the mic, singing one of the verses to Billy Joe’s silly song, “That’s What She Said Last Night.”

The 65-year-old from Waco, TX passed away Friday (11-15) in Austin due to complications from heart surgery. Though he made it through the surgery initially, Calhoun passed away after the procedure due to an aortic aneurysm. “Tony wasn’t black or white, he was everybody’s friend. I’ll never forget him,” Billy Joe Shaver told KWTX.

Born in Mart, TX east of Waco, Tony Calhoun grew up in a musical family with four brothers, first playing piano and trumpet. His father was a staff sergeant and the family moved around a bit, including living in Germany. Calhoun would also spend some time in the Army stationed in Germany in his young adult years, and worked as a DJ for Armed Forces Radio. He would also spend time attending the University of Maryland, the University of Wisconsin, and McLennan County Community College.

Tony Calhoun fell into the blues scene for many years, playing bass behind the likes of B.B. King, Robert Cray, Buddy Guy, Sonny Rhodes, and in the band Hot Soul On Ice. After paying dues for years, Calhoun decided he wanted to take his deep blues voice and mood for grooves and make a name for himself, starting the band Tony Calhoun and the Pleasure, with Derrick Dutton on guitar and Jonathan Kutz on drums.

Playing throughout Texas and beyond for many years, Tony Calhoun and the Pleasure went on a hiatus in 2005, but reformed in 2011 to become one of the most well-beloved bar bands in the Waco area. Calhoun played with other bands as well, including the Mojo Assassins. It was during his time as a revered local musician in Waco that he fell in with Billy Joe Shaver, joining his band officially in 2016, and quickly becoming a fan favorite from his saucy presence on stage.

“Tony was a light to the world, I will miss his deep spirit and infectious bass playing, but mostly I will miss his smile and his kind heart,” says Billy Joe Shaver guitarist, road manager, and solo performer Jeremy Lynn Woodall. “I’m beside myself with grief and love for his friends, family and his countless fans.”

Tony Calhoun continued to play with other bands and as a studio musician during his tenure with Billy Joe Shaver, and continued his solo career as a Waco music personality recognized and beloved by many. Just a week before his passing, Calhoun had celebrated the release of his latest record Black Knight at the Waco Convention Center.

Tony Calhoun is one of multiple bass players who have passed away recently in the greater Texas music scene. Kelley Looney of Steve Earle’s backing band The Dukes passed away in early November at the age of 61. Looney actually started his career as Billy Joe Shaver’s bass player before playing with Connie Smith and others, and joining Steve Earle’s band in 1988. Jimmy “JAM” McFeeley formerly of Reckless Kelly and other projects also passed away recently. No cause of death has been cited yet in the passing of Kevin Looney and Jimmy McFeeley.

Bass players often play an unheralded part in bands, blending into the shadows and selflessly setting the groove for the music. But you always noticed Tony Calhoun on stage, and his presence will be missed by music lovers in Waco, TX and beyond.

A Go Fund Me page has been set up for the family of Tony Calhoun.