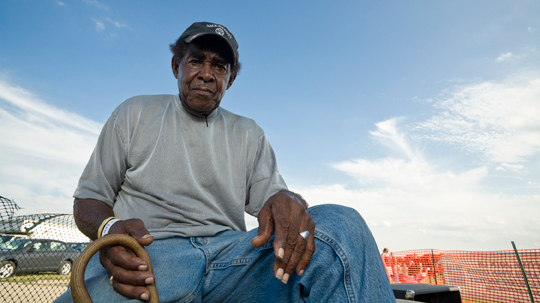 Legendary North Mississippi Blues great James Lewis Carter Ford, known affectionately as “T Model Ford” or “Tale Dragger,” has passed away, according to his booking agent the Bucket City Agency. One of the original Mississippi blues greats that made up the Fat Possum Records roster, T-Model passed away after a long illness at his home in Greenville, Mississippi this morning surrounding by his loving wife Stella and family.

T Model somewhat famously had no idea exactly how old he was, but friends, family, and fellow musicians estimated he was born around 1920 in Forrest, a small community in Scott County, Mississippi, making him 93-years-old. He didn’t start performing professionally until 1997, after his 5th wife left him and gave him a guitar as a “leaving present.”  The blues legend was self taught, and he could not read music or guitar tabs. Music writer Will Hodgkinson once said T Model’s one-of-a-kind guitar technique could not be explained.

T Model suffered a stroke in late May of 2012, and though the guitar player and singer had suffered minor strokes before, friends and family said his spirits were “uncharacteristically low” after the episode. T Model never performed professionally again.

“T-Model’s credentials are impeccable; if anything he’s over qualified,” says Fat Possum records of their former recording artist. T Model recorded five albums for Fat Possum, and was their last surviving blues artist from their original roster. T Model would later record for Alive/Naturalsound Records, and regularly toured with the Seattle-based blues band GravelRoad.

T Model Ford’s father had 26 children. He was plowing the family’s field behind a mule by age 11 before getting a job at a sawmill and eventually being promoted to truck driver based out of Delta, MS, near Greenville. He was once sentenced to 10 years on a chain gang for murder, but only served two of them before being released.

“T-Model held a special place for his many friends, fans and family. He was a one-of-a-kind blues character, and anyone who ever met him has some amazing and/or ridiculous tale to tell,” says Bucket City.

T Model’s sound, along with the other North Mississippi blues legends, has been given credit for inspiring the sounds from artists like The Black Keys and Scott H. Biram.

Funeral arrangements are currently being made. Fans and friends wishing to donate to T Model’s family are being asked to give directly to the bank.