Listen to me folks, GET THIS ALBUM! I know it’s my job as some high fallutin’ music writer to come up with a bunch of stuff to say about music. But after listening to Painkillers, if I were you, I’d skip all the gabbing and just go get it. And then find the biggest, loudest audio player you can procure and crank it to 10. If you want to flatter me, come back and read the rest at some other point.

The merging of Black Diamond Heavies keys player James Leg with the dirty punk blues duo Left Lane Cruiser known as Painkillers is not a cover album. No, it’s a concept album. Yes, it is made of all covers, songs like “Come to Poppa” made popular by Bob Seger, “When The Levee Breaks” by Led Zepplin, but this is a concept album in the truest sense. Concept is what so many albums are lacking these days, and how this album takes a rag tag of recognizable songs from the rock and blues worlds and makes them into a remarkable collection that marks the most viscerally-satisfying album I have heard so far this year. Wanton, ribald, reckless, and uninhibited, Painkillers will have you slam dancing and pissing off the neighbors. 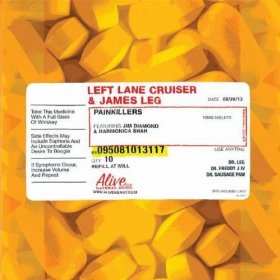 Painkillers isn’t just a catchy idea to sketch some cover art around, it is the idea this album is built from, to take a bunch of timeless, kick ass songs, give them the dirty, heavy-handed Left Lane Cruiser/James leg punk blues treatment, with the result being an album that is perfectly concocted to kill pain. That’s what’s so genius about it. If they had released a batch of original songs under this concept, the painkilling would just be a placebo. By taking songs we all know and love already, songs that mean something to us, the medicine is potent, fast-acting, striking right at your gut.

How’s the instrumentation on the album? The approach? Dirty. Real dirty. Nasty, filthy. All the songs are awash in a mess of gritty reverb and distortion. Don’t come here looking for any lightning-fast chicken-picking licks to tinkling of keys, this is about immersing you in a wall of sound. And though the nasty, dirty punk blues approach may not be for everyone, the song selections are. Pure genius went into picking these songs. For me personally, I didn’t care for some of the blues standards, but “Chevrolet” made famous by Taj Mahal, and The Rolling Stones’ “Sway” are two of my favorite songs of all time, and to hear the James Leg/Left Lane Cruiser tandem do their worst with them was a gift tantamount to a pull of nectar from a goddesses nipple.

One word of caution: Yes, Painkillers is habit forming. (Come on, did you think I was going to make it all the way through this review without some drug cliches?) And just like many albums that pull you right in on the first play, Painkillers can lose its potency rather quickly. But after you set it down for a few days, you will find it calling you back once again.

No joke, if you’re depressed, lonely, angry, sad, whatever, as prescribed, Painkillers will get you to feeling right.