Brantley Gilbert’s “Bottoms Up” (A Rant)

Trigger Down with Pop Country 209 Comments 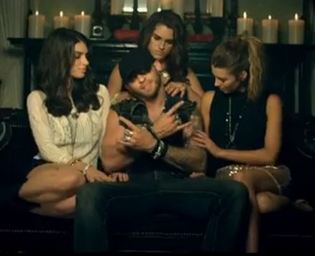 In this the season of giving, can we all at least come together as one, regardless of sex, race, orientation, creed, religious, political or social status, or cultural background, and swallow our collective differences, hold hands in the common bond of humanity in a rising chorus of hosannas, and all universally decree that Brantley Gilbert is the biggest douche ass to ever suck air on planet Earth?

Such a gift from heaven it has been to not have Brantley terrorizing us with new music for a good long while. But apparently Brantley was just resting up, refining his putrid exploration into the very innermost reaches of human vanity and self-ingratiation to then unleash upon his trashy fans with the sweet residue of methamphetamine glistening on the edges of their inflamed nostrils, the purest form of raging narcissism ever witnessed in Western Civilization in the construct of his new diarrhetic single “Bottoms Up,” and it’s accompanying video.

Some may want to tell Brantley Gilbert to go fuck himself for putting out such an awful song, but in Brantley Gilbert’s self-centered world, truly fucking himself would be the fulfillment of his wildest dreams. The video for “Bottoms Up” starts with a bunch of submissive prohibition-era flapper girls doing all the heavy lifting—loading up crates of bootleg alcohol into Brantley’s motor carriage, while Brantley orders them around, flexing his back muscles and showing off his water pistols for the camera. Yes, what a gentleman. Then what ensues is the most self-absorbed 5 minutes one can witness this side of masturbating to oneself in a mirror.

Like many of it’s sonic peers originating from mainstream country music males right now, “Bottoms Up” offers absolutely no redeeming nutritional value to its listeners whatsoever. It simply beats its audience over the head with a servile sense of rabid shallowness and wanton materialistic consumerism conveyed with Nickelback stylings underlayed by a buried banjo track. Joey Moi eat your heart out. About the only thing “Bottoms Up” is good for is supplying the soundtrack to a 16-year-old’s first drinking escapade subsequently followed by throwing up in a Taco Bell parking lot. 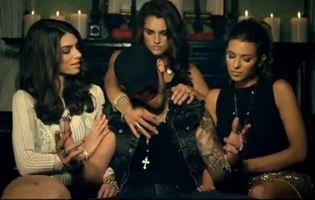 At one point in the video, three women are surrounding Brantley, rubbing their hands all over him. But these girls aren’t copping a feel, their feverishly searching for Brantley’s beleaguered genitals that have taken the form of two acorns flanking a Vienna sausage that then fled up into his abdomen like a rodent scampering into its hole—the result of a tireless regimen of prolonged steroid abuse; hence the nonstop, headlong pursuit of this song and video to compensate and dramatically oversell Brantley’s manly prowess and masculine superiority.

One interesting part about this song and video is the premise is all based around alcohol and drinking. Brantley is cast as a bootleger and party Barron, but in real life he swore off the sauce over 2 years ago, or supposedly did. Hey, I commend Brantley’s sobriety if it’s still ongoing and applaud his discipline, but it really doesn’t lend to the sincerity of whatever muddled, mumble-speaking and Ebonics-inflected message Brantley is trying to convey in this “Bottoms Up” monstrosity. Brantley may have a brass knuckles handle for his microphone to show just how much of a hard knocker he is, but his preferred beverage is more akin to 2% milk than 90-proof moonshine.

The video ends with Brantley pulling up to his hideout, and despite him being such a badass that he could impregnate three women at the same time simply by starring at them from across the room, he fails to notice the sheriff’s car parked 15 yards away from his illegal still shack. I don’t want to come across as too sensitive or gratuitous by saying the video for “Bottoms Up” ends with a cop killing scene similar to something Ice-T would dream up circa 1990, but man, that is certainly what it looks like. Sure, this is all make-believe, but the murdering of Brantley Gilbert’s dignity in “Bottoms Up” is very, very real.

You didn’t bottom up Brantley, you bottomed out.