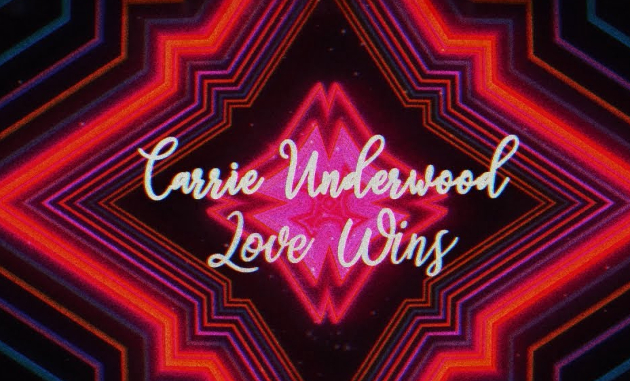 The role of mainstream country music in this contentious time of ever-present social cataclysm and perennial political polarization is starting to materialize, and in pretty conclusive form. Starting with Luke Bryan’s #1 song “Most People Are Good,” then to Kenny Chesney’s #1 “Get Along,” and now with Carrie Underwood’s “Love Wins,” we’re seeing a consistent pattern coming from country pop’s apex performers of trying to bring people together. You can even dig deeper to “Dear Hate” by Maren Morris, and “Kill A Word” by Eric Church to fortify this argument.

Of course you’re fair to question just how “country” Kenny Chesney, Carrie Underwood, Luke Bryan, most any mainstream country star, or their respective singles actually might be, but these songs do symbolize country music finding its place, and its role as society works through a rough time and attempts to come to grips with new realities amid civil unrest and social media expansion. Country music is seeing all the turmoil, and wanting to be a calming, unifying voice, instead of choosing sides, and lending to the discord.

Historically, country music has always played the role of the constant, the compass, the thing you can count on and come home to, regardless of how crazy the rest of the world becomes. That’s the reason it’s so important that country music presents a consistency of sound and message, and that it holds true to its roots, binding generations together like a continuous thread as opposed to the constant upheaval and revolutions of expression other genres and mediums often experience.

Despite the very positive and uplifting message of universal acceptance these top flight commercial country stars are presenting in new singles, this in itself is a polarizing enterprise to certain elements, especially in media and politics which are populated by those who benefit from classifying people into certain demographics, and then pitting those elements against each other with the purpose of sowing chaos to increase their grip on power in the social order.

We’ve already seen a slew of think pieces from writers with few or no ties to country music proper who are chastising the genre for its attempts at the pacification of rural and working class people during this important moment in history. In their estimation, country music should be sounding the alarm bells, digging down to it’s underprivileged, populist roots, and joining the full-throated mob calling for the disruption of everything. To these professional pugilists, popular country fans are no more than unwitting pawns devoid of free will, obsequious to the preaching of pop stars, and who could turn the political tide if they were just goaded in the right direction by their favorite entertainers.

But an artist like Carrie Underwood is not going to do that, ever. Just like Dolly Parton before her, she has sworn to stay neutral on political matters, despite the media trying to pull her into the fray. Instead she often presents a positive message to her audience, like she does in her new song “Love Wins.” Underwood goes as far as to call out politics specifically in the new song, along with prejudice, which at this point are nearly interchangeable in the way they breed irrational thought and behavior in people.

It’s difficult to criticize the effort and the message Carrie Underwood undertakes in “Love Wins,” but it’s fair to find fault in the execution, and the overall result. Of course there’s not much to characterize as country in this song, but that ship sailed with Carrie Underwood years ago. Overall though, the effort just feels sappy, forced, and too direct, despite the nobility of the intent.

Just like songs that tongue lash one side or another across the political divide, and do nothing more than to act like steam valves for the anger of their authors—convincing nobody in the audience of anything and only reinforcing preconceived ideals—you can’t just preach idealistic attitudes in a song and expect it to be effective in changing hearts. Story, nuance, and laying lessons between the lines of lyrics is how you burrow into the consciousness of listeners, and awaken wisdom.

Nonetheless, it’s unfair to label Carrie Underwood’s “Love Wins” as a deflated effort, or even as ineffective in this early stage. Even though rural dwellers and country fans are often the favorite whipping boy of media and popular culture for their closed-mindedness, in this most closed-minded of times in modern recollection, the effort of many country artists to speak up for inclusion and understanding is something you can be proud of as a country music fan, even if you wouldn’t be caught dead listening to a Carrie Underwood song otherwise. It’s especially welcoming as a trend since it’s emerging from the ashes of Bro-Country.

Inclusiveness and open-mindedness were often characterized as the enemy of country music in past eras—songs like “Okie From Muskogee,” “Courtesy of the Red, White, and Blue,” and similar odes not helping to end the stigma. Now it’s country music that is trying to be the calming and inclusive voice in the room. Perhaps that speaks to just how far country music has come. Or perhaps it speaks to just how far the voices of some have gone from their stated purpose of unifying, to dividing.

Carrie Underwood’s “Love Wins” will probably not make a significant dent in this tug-and-pull war for the heart of American society, but it does help align where mainstream country has chosen to place itself, which is lobbying for dialogue and reconciliation between warring parties. In such a contentious time, this effort is hard to criticize, even if some may find things to criticize about Carrie Underwood’s specific effort.