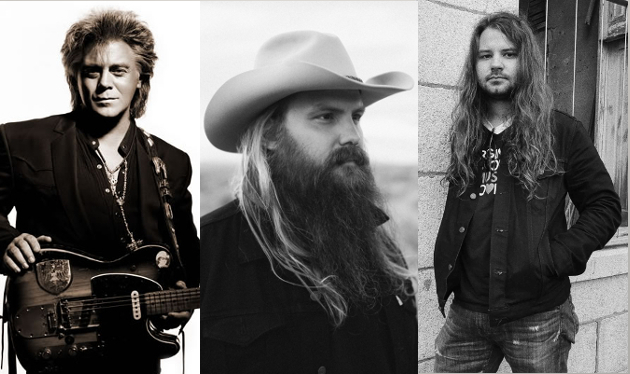 Over the last couple of years, Chris Stapleton has been rewriting the rules and breaking records when it comes to the possibilities of artists who don’t fit the mainstream country mold. His album sales have bested everyone else, and have only just recently begun to slow down a bit since it’s been so long since his last release. The accolades and awards started to pile up so high for Stapleton, some in the independent and Americana ranks began to feel resentment for the man, and soured on seeing so much attention go his way. But the accolades and shattered ceilings just keep coming.

One caveat pop country fans have loved to flaunt whenever Chris Stapleton’s gaudy album sales come up is he couldn’t match the live numbers or tour grosses of the titans of the industry such as Luke Bryan or Jason Aldean. But now even that is changing.

In the most recent tabulation for Billboard’s Hot Tours list compiled via Boxscore numbers, Chris Stapleton’s current All-American Road Show tour with Marty Stuart and Brent Cobb came out on top, beating out massive artists such as Ed Sheeran, Britney Spears, and U2. Now granted, Stapleton and The All-Americana Road Show benefited from fortuitous timing since Taylor Swift, Luke Bryan, and others didn’t play as many shows during the reporting period. But nonetheless, this is a massive development for an artist that you still can barely find on the radio, is not some classic rock legacy act known for selling out stadiums, and has two independent artists opening his shows for him.

Again, this is a little bit of an anomaly considering how the calendar fell and how many shows Stapleton played through the reporting period, but the numbers don’t lie. What this means is Chris Stapleton is starting to see the same success live as he’s enjoyed with album sales, and is starting to challenge the big fish not just in country, but in all of music for tour ticket sales and gross earnings.

Either way, Chris Stapleton has shattered yet another barrier, opening up similar possibilities for independent-minded artists, and also exposing massive crowds to Marty Stuart and Brent Cobb in the process. All of a sudden, Americana is challenging mainstream country in the money department, and in more ways than one.