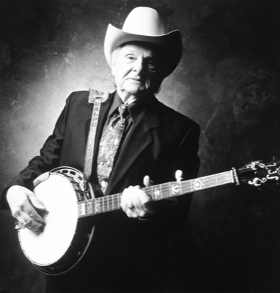 Bluegrass legend Dr. Ralph Stanley, who passed away on June 23rd, was laid to rest Tuesday evening (6-28) after a public service that included words and performances from Vince Gill, Patty Loveless, Jim Lauderdale, Ricky Skaggs, and other close friends and well-known performers in front of the crowd assembled at the Hills of Home Park in Coeburn, VA where Ralph Stanley’s annual music festival has been held since 1970. Stanley’s immediate family flanked the stage, with Stanley’s coffin draped with an American flag as the centerpiece.

Ricky Skaggs, who played in Ralph Stanley’s Clinch Mountain Boys with fellow Kentuckian Keith Whitley as teenagers, sang and said some words for Stanley as well.

“My mom was an old mountain woman. Sung hard, sung high, and sung loud,” Ricky said. “Yeah, she could spay cats in four counties with her voice. She was a singer. Just like old mountain women would sing, hard and loud. When me and Keith [Whitley] met him when we were 15. I said, ‘Ralph, you sing just like my mom.'”

“I’ve loved Mr. Monroe and Flatt & Scruggs, but there was something, and y’all know what I’m talking about,” Skaggs said choking up. “There was something, and I can’t put my finger ON it. But I can put my finger IN it. It’s a well. It’s a well of purity. It’s that deep well of music, the old ancient sounds. So I believe if the word of God is alive, and I believe it is. Then I believe the music he created out of his heart to give us to sing praises to Him, that music is just as alive as His word. And we take it to the beer joints and the honky tonks and everywhere and we sing songs about Jesus right there, and that’s what people need to hear. They want to hear it. People that don’t go to church, they’ll come and listen to all of us sing. Yet when we sing a song about the Lord, it touches them. It’s another reminder that they need to deal with their life and deal with their heart. I was there. We’ve all been there.”

After Skaggs sang a hymn, Patty Loveless and Vince Gill joined him on stage.

“Doing “Pretty Polly’ with [Ralph Stanley] meant so much to me,” said Patty Loveless. “I had a career, but it just raised it even further doing it with Ralph Stanley. And to sing with him on stage, because he was the one who taught me how to sing … His voice was his instrument, and how beautiful it was. And he reached so many all over this world.”

“If it had not been for the music of the Stanley Brothers, especially Ralph’s voice. I wouldn’t have known how to write this song, and I wouldn’t have known how to sing this song,” Vince Gill said. “I remember as a 16-year-old boy, I was really taken with bluegrass. The first festival I ever got to hear Ralph’s voice in person was life changing. That was the voice of all the voice I ever heard in bluegrass music, that was the most mournful, the most soulful, and it reached inside of me more than any other voice I heard in bluegrass.”

Ralph Stanley passed away due to complications with skin Cancer. He was 89-years-old.