Country Is Now Pop: Sam Hunt’s “Leave The Night On” 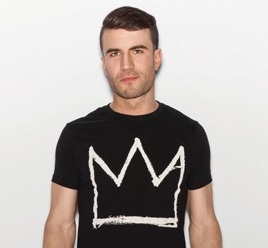 Forget Taylor Swift, and her first win for the CMA’s prestigious Entertainer of the Year award in 2009. Forget Swift’s huge pop blockbusters of 2012 like “We Are Never Ever Getting Back Together” and “I Knew You Were Trouble”. Forget Jason Aldean taking the country rap song “Dirt Road Anthem” and making it into the best selling song in all of country music in 2011. And forget Florida Georgia Line breaking the all-time record in country music for weeks at #1 with the song “Cruise”. All of these indelible moments on the timeline that slowly but surely is narrating the downfall of country are simply the stepping stones, the precursors to what is symbolized by the song written and released by up-and-coming “country” star Sam Hunt called “Leave The Night On”.

Don’t worry about how the song sounds to you. Whether at first listen you like it or not is somewhat irrelevant. Don’t worry so much about measuring it against the others songs doing well at country radio right now, or even the worst songs, or the best songs of the past few years. Don’t worry about measuring it against the other songs that have gone on to define clear lines of demarcation during country music’s downward spiral. Whether “Leave The Night On” is immediately objectionable to your music palette is of no concern. If fact, its innocuousness—its innocent, disguising, and typical nature is arguably what makes it so dangerous.

This is not a review, this is a warning. Sam Hunt’s “Leave The Night On” is a potential swan song for what we define as country music today, more than any song that has come before. I know, you’re saying, “Can you tell me this song is somehow more pop than Taylor Swift, or pushes the limit more than Jerrod Neimann’s EDM monster ‘I Can Drink To That All Night’?” Yes, that is exactly what I’m telling you.

Forget your hurt feelings of, “Hell country has sounded like pop for years,” or even your misappropriated wisdom of “country has always been influenced by pop.” Of course country has always been influenced by pop. But when country becomes pop, which it ostensibly does with “Leave The Night On”, this is a completely different matter. It is the implementation of a completely new rules regime defining what country music is, or what it is no longer.

Never before have we had a song that so recognizably belongs in the pop format get released to country radio by a non-established country artist. And yes I know, he’s signed to MCA Nashville, not MCA, and he’s written some songs for other country artists in the immediate past. No matter, “Leave The Night On” is a test; a canary sent down the country music shaft to see if truly any song can be released to the lucrative country format, and fly.

Country music is now the most dominant genre of American music. Not hip-hop, not rock, and not even pop. It is country that rules the roost. It is country that dominates radio and televised award shows, and that stamps more tickets at live events every year than anything else in music. Country music isn’t turning into pop. Country music now is pop by definition, because it is the most popular genre that exists. And what used to be known as “pop” is now nothing more than a derivative of country—a less country-sounding subgenre of pop, which is country.

A world where “Leave The Night On” can be successful on country radio is one where country will be unable to define itself or its borders, or control its destiny. It is one where country is open to intrusive infections of hyper-trends and performance histrionics from artists. It is one were everything is malleable and arbitrary, and is simply defined by what is popular today, with contempt for whatever came before.

And even worse, “Leave The Night On” will be a smash hit; a blockbuster of 2014. It has already seen one of the most astounding rises up the country charts from an unproven, unknown artist we’ve virtually ever seen. If Sam Hunt can release a single like “Leave The Night On” and have it be successful on country radio, then anyone can. And even more troubling, anyone will.