“I’m as nervous as a mosquito in a nudist colony,” said Jim Ed Brown as he took the podium to address the assembled media and dignitaries. All three members of the Browns were in attendance to accept the induction. The formal induction ceremony will be held later this year.

The entire announcement ceremony can be seen below. 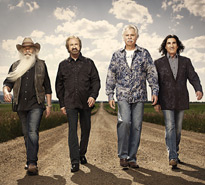 An American country and gospel quartet made up of Joe Bonsall, Duane Allen, William Lee Golden, and Richard, Sterban, The Oak Ridge Boys are known for their lasting influence through their four-part harmonies. Beginning as a gospel band in the late 40’s, they became popular in the gospel realm in the 50’s, and remained in the discipline all the way up to the mid 70’s when they made the switch to country music. First known as the Oak Ridge Quartet, the Oak Ridge Boys hold a special place in the hearts of many country music listeners for their invaluable contributions like “Elvira,” and “(I’m Settin’) Fancy Free.” Their unique baritone, bass, tenor, and lead lineup contributed invaluably to the sound of country, and their influence in country and gospel music still lingers today.

The Oak Ridge Boys continue to tour and release music. They are also continue to be active members of the Grand Ole Opry. 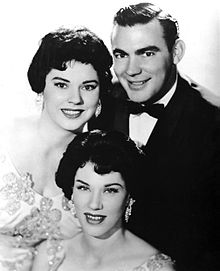 A family band consisting of brother Jim Ed Brown, and sisters Maxine and and Bonnie Brown, The Browns were a country and folk trio that rose to prominence in the mid and late 50’s, principally with their Grammy-nominated song “The Three Bells” which became a #1 hit on Billboard’s country and pop charts, and eventually sold over 1 million copies.

Formed in Pine Bluff, Arkansas after Jim Ed and Maxine signed a record deal as a singing duo, The Browns got their big break on Ernest Tubb’s radio show after singing their original song “Looking Back to See.” After the 18-year-old Bonnie graduated high school, she joined the act and they began performing regularly on the Louisiana Hayride and the Ozark Jubilee. As the family band continued to perform and release music, their prominence only grew, eventually making appearances on The Ed Sullivan Show and American Bandstand. Some of the trios other hits included “Scarlet Ribbons,” “The Old Lamplighter,” and a version of “Blue Christmas.”

In 1965, Jim Ed Brown signed a solo contract with RCA and began to record and release music outside of The Browns band, including numerous successful hits. This slowly caused the band to dissolve, eventually disbanding officially in 1967. However over the years, The Browns have reunited on many occasions and continue to perform together today. Jim Ed Brown has become a mainstay of the Grand Ole Opry over the last few years, and also DJ’s a radio show. In 2015, he released a new album called In Style Again—his first record in 40 years. 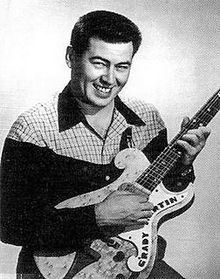 Nashville “A-Team” member, and monster country and rockabilly session guitarist, Thomas Grady Martin was a tower of musicianship in Nashville for nearly 50 years. Born in Chapel Hill, TN in 1929, he got his start performing regularly on WLAC in Nashville at the age if 15. He later joined Paul Howard’s Western swing group the Arkansas Cotton Pickers who played on the Grand Ole Opry, where Opry mainstay “Little” Jimmy Dickens saw Grady, and hired him for his band. Soon Grady Marin was a mainstay of country music.

Grady Martin played on “Coal Miner’s Daughter” and “El Paso.” He played with Johnny Cash, Patsy Cline, Elvis Presley, Buddy Holly, Willie Nelson, Roy Orbison, and so many others. In the late 70’s, he was the touring lead guitarist in Willie Nelson’s band, appearing in the movie Honeysuckle Rose. Grady Martin was forced to retire in 1994 due to failing health, and he passed away on December 3rd, 2001 in Lewisburg, TN.