“Country Weekly” Is The Latest Victim of the “NASH” Brand Implosion 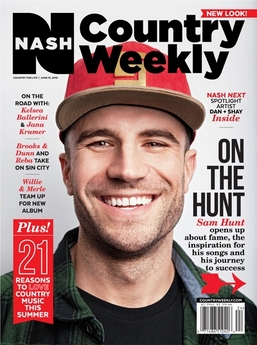 Welp, here’s yet another thing the Dickey Brothers and their stupid plan to take over the world with their moronic “NASH” brand has screwed up. Not that Country Weekly was ever good for much more than getting housewives hot and bothered in the checkout aisle with pictures of Keith Urban on the cover, or lining the floor of Tweetie’s bird cage, but it was one of the last places you could find pertinent news about country music in print, and now after 20+ years of publication it’s no more, at least in print form.

Country Weekly started in 1994 as a country music lifestyle magazine that ran interviews with stars and covered news from around the genre. In 2014, Cumulus purchased 50% of the magazine in a partnership with it’s owners American Media and eventually relaunched as NASH Country Weekly. And in typical corporate takeover fashion, Cumulus is now gutting the publication to deal with plummeting stock prices that have fallen 93% in a year, while the company suffocates beneath $2.5 billion in debt.

Announced on Thursday (4-14) Cumulus is ordering the print division of NASH Country Weekly closed and laying off most or all of the assigned staff. NASH Country Weekly will stay open as an online outlet rebranded as NASH Country Daily. So instead of having 100 online country outlets to print the same exact press releases from the industry verbatim, and regurgitate blogs from Rory Feek and post jittery iPhone videos as original content in a vacuum of a unique thought or any true journalistic curiosity, we’ll now have 101. And Cumulus will still implode in the next 6 to 18 months. Meanwhile even more hard-working professionals in the country industry are out a paycheck.

Of course, Cumulus is trying to put a positive spin on all of this.

“This is a win-win,” says Senior Vice President of content and programming for Cumulus, Mike McVay. Gee, I wonder if the laid off employees feel that way. “While enabling exponentially more country music fans to access NASH content, when and where they choose, it frees significant resources for us to laser-focus and double down on our investment in the properties and platforms of the powerful NASH brand that present the greatest growth potential. We remain deeply committed to NASH, proud of its cultural significance and influence in the country community and optimistic about its future.”

No doubt the print model for publications has become more and more difficult with the advent of the internet, don’t buy into the idea this was a forced move by Cumulus because circulation of the magazine was so low. Country Weekly was never a big subscription publication, it was an impulse buy at grocery stores right beside the bubble gum. It’s not surprising that the publication is deciding to focus more on the online medium, but it proves yet again that Cumulus’ “NASH” brand is not a buoy, it’s an anchor.