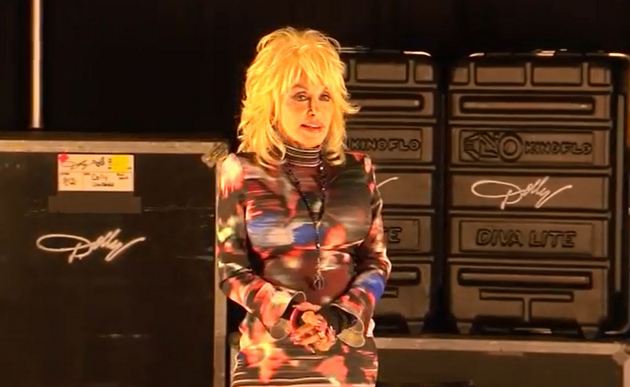 Dolly Parton will have a busy 2016 ahead of her, and held a press conference Monday morning to fill folks in on all she has planned. Along with upgrades to her theme park Dollywood, including the first “launched” wooden roller coaster called Lightning Rod, which will be the fastest wooden coaster at 73 mph once it’s completed, Dolly Parton will have a new double album, and will embark on a 60-date tour of North America.

“I’m going to go on tour this year in American and in Canada for the first time on a big extensive tour,” Dolly said. “Been about 25 years since I’ve actually toured in Canada. We’ve done a few shows in America, but we’re going to be really doing an extensive tour starting in June through December.”

The tour will coincide with the release of a new 2-disc album called Pure & Simple.

“I don’t know how pure I am but I’m pretty simple,” Dolly said laughing. “The reason I’m calling it that is because actually I’ve stripped down my show quite a bit to where we don’t have a lot of electric instruments, we don’t have a lot of videos … But I’m doing a lot of songs that’s really scaled down, and not a lot of music. Of course, I do a lot of talking. What else would I do, right? So we’re excited about the whole show. We did some shows at the Ryman last year, and some shows at Dollywood for the Imagination Library, and we used the Pure and Simple show. People really liked it.”

Pure and Simple will include “about 12 songs that I’ve written, new songs,” Dolly says, as well as ‘pure and simple’ versions of some of Dolly’s biggest hits.

Parton was also asked about the passing of Joey Martin Feek, who Dolly had made a video for right before she passed away. “When I heard she had passed it really hit me like a relative, it really made my heart sad,” Parton said. “I was just so sorry that she had to be taken but I guess the Lord needed her more than we did.”

Parton also talked about her TV movie Coat Of Many Colors, which will be released on DVD May 3rd. There’s also a second installment coming from NBC in the future which will be based off of Parton’s song “Jolene.”

Dolly may have just turned 70 years old in January, but there’s no signs she’s slowing down any time soon.

The release date for Pure and Simple and tour dates have yet to be announced.