Eli Young Band Goes Metro with “Turn It On” 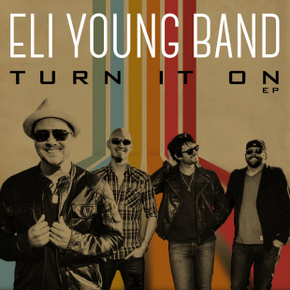 Here we go country music fans, it’s time to usher in the new Metro-Politan era of poorly-conceived country music hyper-trends, so turn your dirt roads and tailgates in for club hookups and cocaine mirrors because it’s Katy bar the door, here come the dance club “country” songs at you hard and fast. Bro-Country who? That was so 2014. Now it’s all about combing your hair over like Sam Hunt, acting like you just turned 21 even if you’re pushing middle age, and get ready to say “girl” in every other phrase as you sing about consuming alcohol, late night hookups, and hardly anything else.

The Texas country outfit now turned Scott Borchetta Republic Records signee Eli Young Band were so eager to get their EDM/R&B/Dance contributions out to the malleable and easily-bemused country music public, they just rushed out a digitally-exclusive four song EP featuring nothing but this Metro sound called Turn It On. The title track is the EP’s first single. “We live in a time when fans are consuming music at a voracious pace as well as having a strong penchant for instant gratification.” The president of Republic Records Nashville Jimmy Harnen literally said that in a press release about this song.

What’s so unfortunate about this burgeoning hyper-trend beyond how blatantly obvious it is and how everyone is so keen to chase it, is who it has already claimed as victims so early in its arc. Gary Allan is out there with his big Metro single “Hangover Tonight” acting like he’s Thomas Rhett at age 47, and even though Eli Young was never considered hard country, they had a knack of taking quality songs like Will Hoge’s “Even If It Breaks Your Heart” and making them palatable to a wider audience. Now they appear to be all about getting paid.

“Turn It On” begins in a way that makes you think that maybe it won’t be all that bad. A guitar pluck Ã  la the Rocky theme with a little sub-textured melody that reminded me of Caitlin Rose’s song “Things Change” draw your ear in, but it’s only to have a bowl of pig vomit dropped in your lap when the vocals drop in all super Auto-Tuned with a “Damn girl…” and the stupid, worn-out, stereotypical story of bumping into some girl in a club begins in earnest. We’re still measuring this Metro-Politan trend by weeks instead of months, and the songs are already coming across as incredibly predictable and tired.

After an initial few verses that fly by almost like a formality, the lyricism of “Turn It On” descends into a rhythmic and repetitive droning of “Turn it on, turn it on…” over and over like an audio version of waterboarding. It just goes to show that today’s lyricism is just another vehicle for rhythmic catchiness, and not for conveying anything of value. The only thing that makes this song Texas country is mentioning Shiner Bock instead of some corporate beer, and the attempt at shoehorning something that kind of sounds like a steel guitar in the mix is laughable. Florida Georgia Line has songs written better than this.

And as bad as “Turn It On” is, another song on the new EP called “Drink You Up” might do it one worse in its trend-baiting club-mix manner. It even name drops that awful “Blurred Lines” song. This is not just the story of a lead single to get the attention of the public to peruse their album cuts, this is a downright direction-changing redefining of a career and sound going on for the Eli Young Band. We might get an entire damn long player of this stuff down the road. And the other two EP tracks “Your Place Or Mine” and “Plastic”—though maybe slightly less unfortunate—offer absolutely no reconciliation. Eli Young Band has gone full Sam Hunt, and it’s not a pretty sight to see.

Most mainstream country music male artists and bands don’t even have a defined sound anymore. It’s just following one fad after another. Have they just completely lost the desire to express themselves as artists? Do they enjoy playing music that isn’t them? And nobody seems immune. The only artists who can’t be accused of trend-chasing are acts like Chase Rice and Florida-Georgia Line because trend chasing is all they’ve ever known. Sam Hunt isn’t even original in what he does. It’s just original to country. And you actually compare this music to the artists who make R&B-infused dance club music for a living, and they’d wipe the floor with these country hayseeds trying to get in on the action.