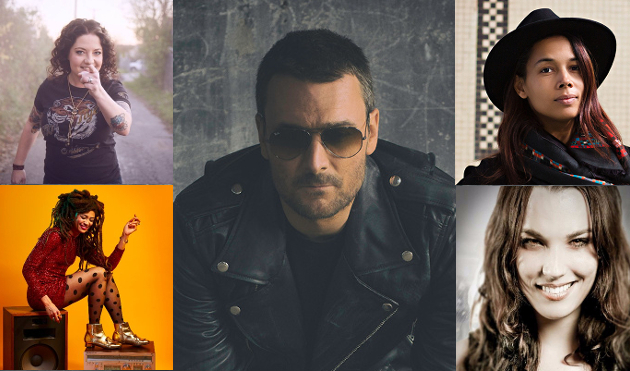 There would be no mainstream country music career for Ashley McBryde if it weren’t for the help of Eric Church. The Arkansas native who has just released her major label debut Girl Going Nowhere via Warner Bros. Nashville had been a struggling songwriter and performer in Nashville for 11 years when Church invited her up on stage at the Allstate Arena in Chicago on April 13th, 2017 during a stop of his Holdin’ My Own tour.

Of course the moment was somewhat choreographed. It’s not like Church yanked Ashley McBryde out of the crowd randomly and it was one of those storybook “A Star Is Born” moments. Church was already a fan of McBryde’s EP Jalopies & Expensive Guitars, but when the video of Ashley performing her song “Bible and a .44.” with Church went viral, the wheels were set in motion for McBryde to become a major and unlikely force in country music.

“She’s unquestionably my favorite artist out right now that’s not out there yet,” Church said introducing McBryde on that stage in Chicago a year ago. “She’s a whiskey-drinking badass, that’s what she is.”

Eric Church isn’t a guy you would expect to be a big champion of country music’s women on the surface. Of the mainstream lot, his reputation has been built on being the hard-nosed rebel who does things his own way, even if some of this is more akin to marketing than the way Church actually manages his daily business. But quietly, Church has become a champion of many of country music’s most deserving women who in the near term have been struggling for any attention at all, with the success and opportunities bestowed to Ashley McBryde recently being just one example.

At the present, most of the men in mainstream country music seem to be obsessed with collaborating with pop divas in hopes of spreading their own names across genre lines and receiving boosts in the charts due to pop radio play. We’re currently seeing this with Florida Georgia Line and their massive single with Bebe Rexha “Meant to Be” out there shattering records. Chris Lane currently has a single surging on the charts called “Take Back Home Girl” featuring pop star Tori Kelley. Keith Urban has a current single with with pop’s Julia Michaels called “Coming Home,” while Kenny Chesney’s collaboration with Pink in 2016 was a big success.

Meanwhile Eric Church recently collaborated with roots music stalwart and Carolina Chocolate Drops founder Rhiannon Giddens on his single “Kill A Word.” The collaboration gave Giddens the opportunity at a bigger national audience, a nice little payday in royalties, and an important performance slot on the 50th annual CMA Awards in 2016.

Eric Church bestowed a similar opportunity to another critically-acclaimed roots performer when he needed a duet partner to perform his song “Like Jesus Does” at the 2013 ACM Awards. Unannounced, Valerie June appeared on stage for the stripped-down, acoustic performance, wearing a long red dress and buzzing the internet as folks scrambled to try and find out who she was.

Eric Church has also gone outside of country and roots for collaborations, yet in the same spirit, reached out to an artist who would benefit more from Eric Church lending his name to them, as opposed to Eric Church being the beneficiary like so many of today’s cross genre collaborations. When Church featured Lzze Hale of the rock band Halestrom on his song “That’s Damn Rock & Roll,” Church was shining a spotlight on another side of music in need of support, which was female fronted rock bands.

And then there are the artists Eric Church has selected to take on tour with him such as Brandy Clark, Sonia Leigh, the previously-mentioned Halestrom, and others through the years. And Eric Church’s spirit of shining a light on the overshadowed extends beyond gender. His recent appreciation for Ray Wylie Hubbard shows this isn’t just some social justice cause for publicity, but something Church revels in, and sees as a responsibility as a top-level artist.

For years, the country music system was one where the bigger artists would champion up-and-comers, and share their audience and spotlight with them so that the next generation of stars could be vetted and supported. These artists were extended this opportunity to them earlier in their career, and they saw it as an important gesture to do the same. It was how the country music farm system kept the genre flush with talent. But today, so many of country music’s top male stars are instead promoting talent on the rival side of the radio dial, and looking to keep their own careers relevant by sponging off of surging interest in pop stars.

In the Americana and independent country world, the practice of supporting up-and-comers is much more common. Sam Outlaw regularly features solo women performers both in his band, and as openers on tours, highlighting Molly Parden, Molly Jensen, and Michaela Anne in recent years. Shooter Jennings has recently recorded songs with Eleanor Whitmore and Patty Griffin, he produced Brandi Carlile’s recent record, and has been touring with Jaime Wyatt as an opener while fiddle player Aubrey Richmond is now a permanent part of his band. Call it the Gram Parsons/Emmylou Harris, or Dolly Parton/Porter Wagoner tradition in country music that has gone dormant in today’s mainstream environment, overlooking the legitimacy and depth women can lend to the musical experience.

With such a dearth of attention flowing to the women of country, the duet or collaboration with country’s women has never been more important. And it’s also never been more rare, which might be one of the underlying reasons so many women are being overlooked. And while some artists like Keith Urban and Kenny Chesney want credit for championing women’s issues, it smacks more of opportunism than a heartfelt extension of help.

Meanwhile Eric Church of all people has been quietly giving a step up for multiple women in country, and in ways that can be measured by their success. It’s up to the women to hold their end of the bargain and make the best of those opportunities just as Ashley McBryde has done by turning in stellar performances and excelling with the opportunities she’s been presented. But it’s also up to male artists to help provide them, now more than ever since women are facing increasingly insurmountable odds.