Eric Strickland’s “Honky Tonk Till I Die” is a Gem

This is what Saving Country Music is all about. This is the reason I put my pants on every morning. Everything else is just fluff, filibustering, treading water until I come across that one artist, that one album that embodies everything true country fans are looking for but have yet to find. That is what you have with Eric Strickland and his band The B Sides, and their album Honky Tonk Till I Die.

From North Carolina, Eric Strickland offers up what in this bear’s opinion might be the best true country, honky tonk album so far this year, expertly balanced with love ballads, drinking songs, songs of struggle, and trucker tunes. This thing is virtually flawless. Get your magnifying glass out and pour over it, I dare you. From the songwriting, to the instrumentation, to just the sheer enjoyment this album offers and the variety of emotions it touches on, Honky Tonk Till I Die does it all just right. 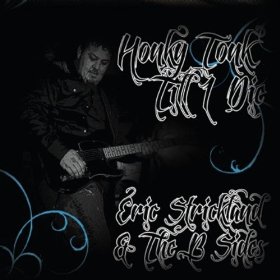 The winning formula here is excellent songwriting paired with seasoned players. Looking at a picture of The B Sides on the inside cover with their beer guts and gray hairs, these country music veterans were the only players worthy of fleshing out Strickland’s stellar compositions. And Eric isn’t some backstage songwriting savant and that’s all, his singing is solid as well, and there is important attention paid to performance and appeal in this music. Honky Tonk Till I Die is amazingly tight, like these songs have been played 100 times before, smelling like cigarettes and beer from being treaded out in the honky tonk many times before being captured in the studio.

“Her” is an excellently-written tribute love song. “Shine Down On Me” is the soulful, honest plea of a real life musician, and the two trucking songs, “18 Wheels of Hell on the Highway” and “The Day The Truckers Shut This Country Down” comprise the fun portion of this album. Looking at the track list with titles like “Honky Tonk Till I Die” and “Haggard and Hell” you may think this is a hellraising affair, but instead I found it to be refreshingly mature and deep without a single swear word to speak of, yet still with some fist pumping, “hell yeah” moments to balance it out perfectly.

One thing I found weird was on my physical copy, the song “Standing in the Headlights” was missing in the track list, yet it is listed on online outlets like Amazon and the song was on the CD itself. Also the last track “My First Love” actually includes two songs, the second being “Drinking Whiskey” which I believe is from a previous Eric Strickland album of the same name. “My First Love” is excellent all by itself, with a bevy of great lines like, “…make you empty out your pocket just to fill up your glass.” and ends with a sing along you can see a whole bar getting swept up in during a closing time serenade.

But about this buried track “Drinking Whiskey,” this is an absolute masterpiece of a honky tonk country song. I mean this is a Song of the Year caliber stuff here. The way Eric holds out the “Whiskey” line way too long in the chorus, and then how the chords step down and deliver you to a country music bliss, it’ll get you and any dog with a drop of hound blood in him braying at the moon and jerking tears. It doesn’t get any better.

Eric may be tired of “Drinking Whiskey” or bashful because he released it before, and that is why he was inclined to bury it at the end of the last track. Well he can kiss my ass because it is new to me, and my plan is to point as many burning spotlights as I can on it. Some huge name should pick this song up and make a million dollars with it for themselves and Eric, so Eric can retire and write another one like this any many more.

My only reservation is that I only have two guns to give it. Needless to say, Eric Strickland’s Honky Tonk Till I Die comes highly recommended.

This is the OLDER version of “Drinking Whiskey.” I think the newer version is better, with a little more of a honky tonk feel and some great Mark Knopfler-style guitar, but this is still a great version to check out.