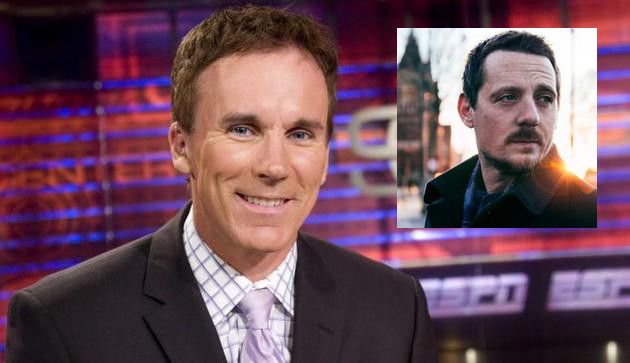 SportsCenter anchor John Buccigross is head over heels for Sturgill Simpson and his new record a Sailor’s Guide to Earth. Or hell, his entire catalog. And if you’ve been paying attention over the last week or so, Buccigross been dropping references to Sturgill and singing his praises left and right.

One of the strange, but cool side stories to the emergence of a new independently-minded insurgency in country music—spearheaded by artists like Sturgill Simpson, Jason Isbell, and Chris Stapleton—has been how the sports journalism world has been on board with it since its inception. How this exactly happened is anyone’s guess. Sturgill Simpson’s music doesn’t really have any sports tie-ins. Simpson doesn’t even seem to be a very sportsy guy. But if you’re apt to listen to sports talk stations or closely follow baseball stats, for whatever reason, you might also find yourself bobbing your head to Sturgill’s music.

This is what happened to the hosts on The Hardline—the afternoon drive show on Sports Radio 1310 The Ticket out of Dallas, who’ve been singing Sturgill’s praises for years now, and even once broadcasted remotely from a Sturgill Simpson gig at Billy Bob’s Texas in Ft. Worth.

That is also what happened to ESPN’s John Buccigross:

The artist that is currently dominating my eardrums at the gym, my 1795 farmhouse, my truck as I drive around my small, rural town of Ellington, Connecticut, and during my 45-minute commute to and from ESPN is Sturgill Simpson. I hadn’t heard of Simpson until I received the following text at 7:56 p.m. ET on March 10 (I still have the text thread, hence the accuracy). It was from a hockey-and-music-loving friend, Jason Burch, in Columbus, Ohio:

“I hesitate to put my perfect record on the line with the country genre, but I am hooked on the album ‘Metamodern Sounds In Country Music’ by Sturgill Simpson. Great voice, lyrically unique, and an epic cover [of] ‘The Promise.’ Give it a shot and let me know if it grabs you.”

This is how Buccigross explained it while writing an article comparing and contrasting the NHL playoff teams intermixed with Sturgill Simpson lyrics called Face the Music, Hockey Fans: The NHL Playoff are a Country Song.

Grab me? It now owns me … So, for the past seven weeks I’ve been consuming the 19 songs from Simpson’s second and third albums. (I bought his debut the day I wrote this blogumn.) This joyful music discovery has coincided with spring, a new life in a new/old house and the fertile canvas of the Stanley Cup playoffs. Music and sports. It dominates my DNA like it does many of yours.

Then a few days ago, during his regular gig on SportsCenter, John Buccigross dropped in a Sturgill reference during some basketball highlights. With a lack of radio support, this is the type of organic connections that occur, and can eventually result in a relatively-unknown songwriter from Kentucky landing the #1 album in country music.