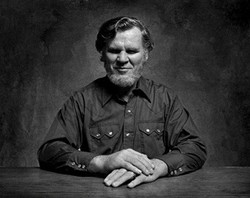 Legendary guitar player Doc Watson has died according to his representatives at Folklore Productions.

The 89-year-old folk and bluegrass guitar legend’s heath issues started on Monday (5-21) Bluegrass Today reported, after a fall at his home. No bones were broken, but the incident exposed other health problems. He was airlifted to the hospital on Wednesday, and late Thursday Watson had surgery to resolve an impacted colon where his entire colon ended up being removed. The procedure was declared successful and Watson was said to be “resting and responsive” afterwards, with Doc’s representative Mitch Greenhill saying, “He has regained some strength. The family appreciates everyone’s prayers and good wishes.” But after a follow-up procedure on Saturday, Watson’s condition never improved from “critical” and he remained in Wake Forest Baptist’s Intensive Care Unit. Doc Watson’s family was called to his bedside at Wake Forest Baptist Medical Center in Winston-Salem, NC on Sunday (5-27).

Monday morning (5-28) it was reported that Watson’s vital signs had improved slightly overnight after a “very rough Sunday,” though he continued to remain in critical condition in the hospital’s ICU.

Doc Watson has won 7 Grammy Awards over his career, and also received the Grammy Lifetime Achievement Award in 2004. The blind guitar player is best known for his influential flatpicking and fingerpicking techniques with the guitar, and his oral history of folk, bluegrass, and mountain music. He was born Arthel Lane Watson in 1923 in Deep Gap, North Carolina, going blind before his first birthday. He got the name “Doc” when a radio announced suggest the name Arthel was too unusual and someone yelled “Doc” out from the crowd.

Thoughts and prayers go out to Doc Watson and his family.