Man I swear, every week there must be at least two of these albums coming out: Somebody and the Something Somethings, with a caricature cover of a fuzzy-faced dude in pearl snaps with trucks in the background singing songs about whiskey, honky tonks, breakups, and diesel. Every week they arrive at the Saving Country Music headquarters in their little padded envelopes to be piled up on my desk in various, loosely-labeled stacks, slowly reaching toward the ceiling like a diorama of some downtown scape; a physical representation of how there’s too much music right now and not enough listeners. 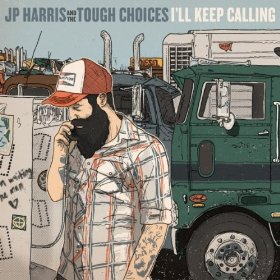 So what makes one of these albums worth checking out more than the others? It’s hard to say, but what I can say is that JP Harris and the Tough Choices‘ I’ll Keep Calling is one of the best of the breed. This is an excellent album, and remarkably so because there’s really nothing new here. There’s no reinvention of the wheel, no retro style to ride some trendy wave, no “progressive” elements to pander to the high-brow crowd. JP Harris’s voice is solid, but nothing special. The instrumentation is all appropriate, but maybe above average at best. I’ll Keep Calling has the same songs country music has been making hay with for over 50 years, so what makes it worth the extra fuss?

It’s how JP Harris separates himself from the crowd is by striking that difficult balance between being familiar, but not cliche. By being traditional, but not traipsing the same worn-out paths that lead to music parody. There’s no corniness here, no sarcasm. No song is bad. No single line falls flat. You can tell this album was patient, well-crafted. It’s all carefully put together and well-rounded until it becomes and excellent representation of what we all are talking about when we throw out labels like “real country.”

I would also label this music “traditional” as opposed to “neo-traditional,” meaning it harkens back 20 or 30 years instead of 50 or 60. There are some of those anachronistic call backs, like “Return To Sender” and “I’ll Keep Calling” referencing answering machines and such that the new school country crowd may scrunch their noses at. But the idea of calling an ex every night, fully knowing they will never answer, at the off chance maybe they will and just to hear that familiar voice on a tape recorder is a story that still can ring true to today’s heart and will eternally as long as heartache is a part of the human experience. You may not be able to find a pay phone any more, but something about a lonely receiver hanging down as is represented on the back cover of this album, still speaks to the heartache universal to the human condition.

This true, honky-tonk, hard country music, with a little Western swing and rockabilly mixed in. Songs like “Badly Bent” and “Cross Your Name” tell hard-nosed stories that don’t need heavy language to drive home their heartbroken themes, and the up-tempo “Take It Back” and “Gear Jammin’ Daddy” gives this album a good variety and spice that keep it engaging throughout. All of these songs could be labeled cliche, but they’re so good, it’s hard to.

Can a long-bearded boy from Vermont make real country music? Can songs about letters stamped “Return To Sender” and and shots of whiskey to drown sorrow still be relevant? If I’ll Keep Calling is any indication, the answer is an adamant “Yes!”