Like the moan of the steel guitar or the cut of the banjo tone, there is just something about the precision and flow of sister harmonies that awaken something in the human spirit that is uncanny, and characteristic of the highest reaches of audio diversion. Considering the long and noble lineage of close sister harmonies, marked on its path by such noteworthy names as The Carter Family, The Kossoy Sisters, and up to today with The Quebe’s and The Secret Sisters, the Swedish sister pairing of Johanna and Klara Söderberg, traveling under the band name First Aid Kit, must certainly be considered right at the very top of esteemed acolytes of this storied discipline.

The occasion of their 3rd studio release called Stay Gold sees the duo rewarded the distinction of having a major label in Columbia Records behind their pursuits; something that is strange for a act with such weight, but not unexpected when you consider that in their home country of Sweden, they are the equivalent of pop stars. However First Aid Kit wields the English language with surprising expertise and purpose, and does so in a folk and roots style that is hauntingly classic and indicative of a time only ghosts can remember. The Söderberg sisters aren’t foreign, they are other worldly, and reach into the hearts of anyone who finds the beauty in folk and primitive country, no matter what borders define their homeland. 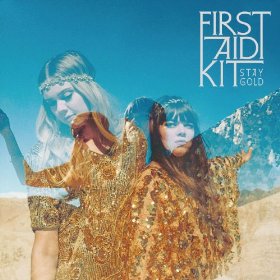 Stay Gold captures First Aid Kit fearlessly unburdening their fears, confiding in the listener very personal matters of self-doubt and worry that are exacerbated by a world of constant change, endless travel, and the inherent travails of navigating life as a young woman amongst prying eyes and directionless paths. The honesty in the songwriting, and the sentiment that bleeds over demarcation lines of gender or situation to find sympathetic ears with most who have the patience and disposition to listen make Stay Gold a songwriting feat before any discussion is broached about the music itself.

And when talking about the music, Johanna and Klara Söderberg put on a melody-crafting clinic, endowing Stay Gold with one rich, fulfilling composition after another full of soaring, frothy vocal exhibitions that run circles around the modern age’s garden variety mainstream singers. One of the reasons First Aid Kit can concoct such astounding melodies and match them so well with story is because their range and adeptness allows them a vocal pasture much wider that most have access to.

Story and melody is then complimented by orchestration that no matter what is happening, is so splendidly and tastefully set in the background, your attention is never stirred from where it should be centered: these two spellbinding sisters. Where their last album The Lion’s Roar looked to compliment their desire to travel as a 3-piece, First Aid Kit and producer Mike Mogis pull out all the stops for Stay Gold, with a full compliment of instrumentation including steel guitar and strings, and even a 13-piece orchestra that lays behind a virtual fog bank, floating in and out of the background, aiding these songs’ natural yearning to take to wing and deliver to the listener the higher reaches of what a musical experience can offer. 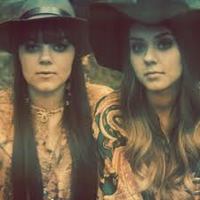 And despite all of the ethereal shades of Stay Gold, it has some splendidly grounded and playful moments that keep it from taking itself too seriously; maybe even a little bit too grounded when the sisters unexpectedly sing about about how “shit gets fucked up” in the song “Master Pretender”, or yell in a shrill moment “STRAIGHT TO HELL!” on “Heaven Knows.” The “Waitress Song” throws you a fun little curve ball too, and despite its trope-like beginning, it slowly reveals the depth indicative of all First Aid Kit material.

Concerns about Stay Gold would be that at times, whether the fault of writing or cadence, this sister duo will try to try to include too many words in a small space. It caught your ear at a spot on the title track of their last album, and it does here in the first song “My Silver Lining” with “I don’t know if I’m scared of dying, but I’m scared of living too fast, too slow.” The beat and background music of a couple of the songs, including “Master Pretender” seem to unsheathe the moody pall normally cast over their music, to an almost Paul Simon-like tribal joy that while not poor by any measure, seems a slight shade inappropriate. Also the song “Heaven Knows”, though probably being the most country-style song on the album, seemed slightly too judgmental in the lyricism.

This is a folk project first, but listeners who will be able to map the parallels between The Carter Family, The Louvin Brothers, and other important country bands will find great joy in this album.

With Stay Gold, First Aid Kit doesn’t just squeeze some Neosporin and slap a band-aid on the wound of bad music, they offer a holistic tincture that heals prolonged ailments and others you never knew you had. Consider it right beside the other high water marks so far in 2014.