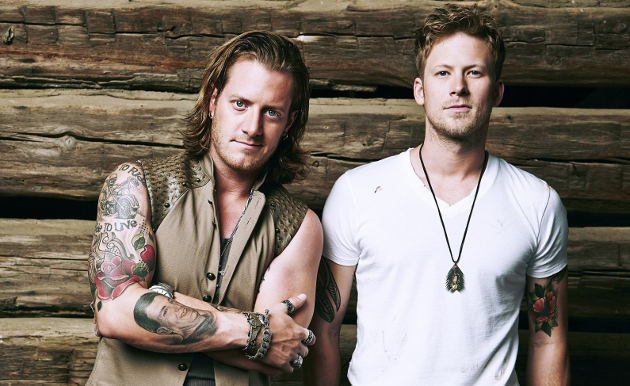 This last weekend, Florida Georgia Line performed at the Country Thunder music festival in Wisconsin on Friday (7-22), and the Great Jones Country Fair in Monticello, Iowa on Saturday (7-23). During both events, Florida Georgia Line reportedly refused to allow uniformed police officers backstage, including at one point threatening to cancel their performance if their demands were not met.

This sparked an outcry from both law enforcement professionals and other individuals working the events, and eventually led to a public outcry against the band from fans who felt the duo was disrespecting the police at a time when high profile police shootings are in the headlines.

Multiple media outlets have reported on the weekend’s incidences, though most of them have only reported on either one incident, or have confused the details of Friday night’s incident with Saturday’s, or vice versa.

Here is the full story:

On Friday (7-22), news began to spread online that Florida Georgia Line had refused all police presence at the Country Thunder Festival in Wisconsin. The primary impetus for the news was a Facebook post by an individual named Kenneth Lee, who claims he was working the festival.

“Feeling very disappointed,” Kenneth Lee posted. “I’m working at country thunder and one of the bands that I enjoy listening to, Florida Georgia Line, has requested zero police presence during their concert tonight. Apparently, they don’t trust the police and have taken the anti-police stance in line with the scum that has been killing police officers all over the country. Well, they can all rot in hell as far as I’m concerned. I hope a bunch of unruly drunken idiots rush the stage, because the boys that would have protected them won’t be there.”

However, Kenneth Lee’s characterization of the situation was not entirely true. Florida Georgia Line had not refused all police presence at the festival, only demanded that uniformed officers not be allowed backstage.

“We were on the grounds the entire event covering the camp sites, festival grounds and also [backstage],” Kenosha County Sheriff David Beth confirmed to  FOX411.

However Sheriff David Beth also did confirm that Florida Georgia Line had requested that no police presence be allowed backstage and that he “was a little taken back by the request.”

Country Thunder organizers also released a statement, saying, “The organizers of Country Thunder have been made aware of recent comments on social media regarding FGL at the festival. We have seen the original post, and none of it was true.”

But that is not entirely true either. Florida Georgia Line did request that no police be allowed backstage. We know this both from Sheriff David Beth’s statement, and from the fact that the very next night, despite the drama the request caused at Country Thunder, the same request for no police presence backstage was made at the Great Jones Country Fair in Iowa.

According to TMZ, Jones County Sheriff Greg Graver was personally turned away when he tried to go backstage to discuss security protocol for the evening after being told no uniformed officers were allowed. TMZ’s report states that the band even threatened to refuse to perform if they saw any cops. Unlike at the Country Thunder fest the previous night, police did not eventually make their way backstage, yet Florida Georgia Line’s management, about halfway through their set, requested a police escort out of town after the show. According to TMZ, after feeling like they had been disrespected, the Jones County Sheriff’s Department refused the escort, as did other local law enforcement agencies after hearing about the incident.

All of this has led to outrage on social media, with many fans angry at the duo for taking a disrespectful attitude towards law enforcement. Monday afternoon, Florida Georgia Line released a statement, saying,

Hey guys, we’ve just been made aware something happened at a show this weekend involving a police officer. We want you to know we have nothing but love and respect for the police. We are bummed anyone ever got a different impression.

However just like the multiple reports on the incident, even Florida Georgia Line’s apology glosses over the fact that it was multiple incidents taking place at two separate events and involving multiple officers. It wasn’t just involving “a show” and “a police officer.” The public outcry began even before the more high-profile incident in Iowa reported by TMZ.

However, the idea that Florida Georgia Line is taking an anti-police stance on political grounds, or is somehow trying to show solidarity with Black Lives Matters or the murderers of police officers in Dallas and Baton Rouge, is ludicrous. Florida Georgia Line has not stated why they did not want a police presence backstage. Seeing police backstage is very common during major concerts for security purposes. But the decision could have to do with not feeling like the presence was needed, or Florida Georgia Line not wanting to disrupt their party atmosphere. There is an unspoken creed between many backstage police officers and music performers to look the other way when it comes to marijuana use and other things that commonly accompany major music concerts.

“I don’t want this to be anti Florida Georgia Line,” Sheriff Graver said. “It might have been inflamed by what happened in other places. What I normally do is I approach the tour manager for these groups usually sometime late afternoon, and I basically ask them what they want from us. Normally it would be several uniformed officers for the meet and greet for security, but then when they go on stage, they may say they need no presence backstage, or they may say they want to keep a couple of officers back there. It’s fairly unusual that you would have a group say that they don’t want law enforcement backstage at all.”

“When I went backstage to meet with one of their representatives, somebody from our fair security basically said that Florida Georgia Line had requested no uniformed personnel backstage before, during, or after the show. So that’s what we did. To me, it didn’t matter why. I was not aware of what had happened in Wisconsin at the time.”

Ultimately, the issue has more to do with how it was reported than what happened. Though Florida Georgia Line’s request for no police backstage was unusual, the demeanor of their management may have been a little gruff with some law enforcement, and their explanation/apology was half-baked and flippant, there is no indication that Florida Georgia Line hates police officers specifically, and is trying to somehow purposely disrespect them.