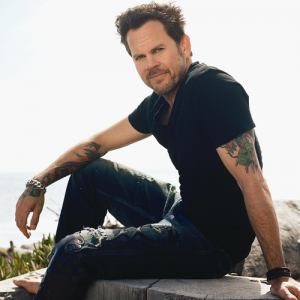 The parade of country artists coming out to criticize the direction of country music continues, with Gary Allan now coming out in an interview with Larry King, decrying country music’s move towards pop, and specifically Taylor Swift and Carrie Underwood.

“You know, I would say no. I would say they’re pop artists making a living in the country genre. I also feel like we lost our genre. I don’t feel like I make music for a genre anymore, and I did, you know, 15 years ago. But I think since the Clear Channel’s and the Cumulus’s and the big companies bought up all the chains, now it’s about a demographic. You know, so they’ve kind of sliced everything up, feeding it to the public in demographics.”

“It’s an amalgam then?” King asks.

“Exactly. Like if you want to get to the young kids, you put it on the alternative station. We’ve sort of ended up in this…we’re nicknamed the soccer mom, like 35 to 45 year-old woman I think is what our demographic is. So it’s very different. You used to be able to turn on the radio and you knew instantly it was the country station just by listening to it, and now you’ve got to leave it there for a second to figure it out.”

“You know I personally don’t like it because I loved the character of country music and I loved what it is and the lifestyle of it…. To me, country music is still Monday through Friday, and pop’s about what happens on the weekends.”

Gary Allan joins a chorus that includes Alan Jackson, Kacey Musgraves multiple times, and other prominent country stars from the past and present coming out against the direction of country. Though the pop vs. country fight has been happening since the very beginning of the country genre, pop and rap’s recent dominance of the country format brought on by the monopolization of radio that Gary Allan references above, and Billboard’s recent decision to change its chart structure to boost “crossover” songs has tipped the scales to where influences outside of country music dominate the sound of the genre like never before.

Gary Allan is a platinum-selling country artist singed to MCA Nashville, who’s released 9 studio albums and 26 charting singles. His most recent album Set You Free was released in January.

See the relevant clip from the Larry King interview with Gary Allan below.

Gary Allan has “clarified” his statements to Larry King in a post to his fans on Facebook. Here it is in its entirety:

As many of you know, last week I sat down for an interview with Larry King. Larry asked me several pointed questions about the state of country music. In particular, he asked me how I would classify several of my peers. A short clip from the interview was posted online last Friday.

Several writers have since taken my what I said out of context and added a spin that takes my words in a direction they were never meant to go in.

For the record, I always have and always will love country music. While our genre has evolved, I stand behind what I said in the interview, “To me country is still about Monday through Friday, and pop is about what happens on the weekends. But it’s definitely changed.”

It’s true. Country music has changed. During the interview I made it a point to say that my own music has changed over the years. I used to make very different music 10 15 years ago. As I also mentioned during the interview, I’m a country artist whose music leans towards rock, although I tend to love the more traditional sounding country of Haggard, Jones and Buck Owens.

When talking about country radio, I went on to say “It’s very different. You used to be able to turn on the radio and you knew it instantly it was a country station just by listening to it. Now you’ve got to leave it there for a second to figure it out”¦and not that it’s a bad thing.” It’s not a bad thing. It’s just different than it used to be.

Larry nailed it in three words during the interview. When trying to put context to my words he said, “it’s an amalgam,” meaning a mixture or a blend. “Right,” I said, “exactly.” Country music is a blend these days. Our genre has enough room in it for me, a country artist whose country leans towards rock and for more pop sounding country artists, as well as more traditional sounding country artists. None of us are the same, but we all make country radio our home.

Today, my interview with Larry King will run in its entirety. I know you are busy and that time is hard to come by. I hope you will take a few minutes to watch it for yourself. That way you can hear actually what I said, rather than read someone else’s commentary or take on what I said.

Editor’s Note: Though Gary Allan doesn’t mention Saving Country Music specifically and there is no specific reason to think he is referring to us when he says his words were taken out of context, please understand that all Saving Country Music did was take the questions and answers Larry King posted in the above video and transcribe them verbatim and in total. We also couched them as being critical with the current state of country music, which they were. Then we also posted the video where the comments came from to give further context. If anything was taken out of context initially, it was the video from Larry King that included only a portion of the entire Gary Allan interview. Other websites may have taken more specific comments out of context and couched them a certain way, but Saving Country Music simply posted what was said.

Gary Allan continues to clarify the statements he made to Larry King, now scribing a handwritten letter to country radio. 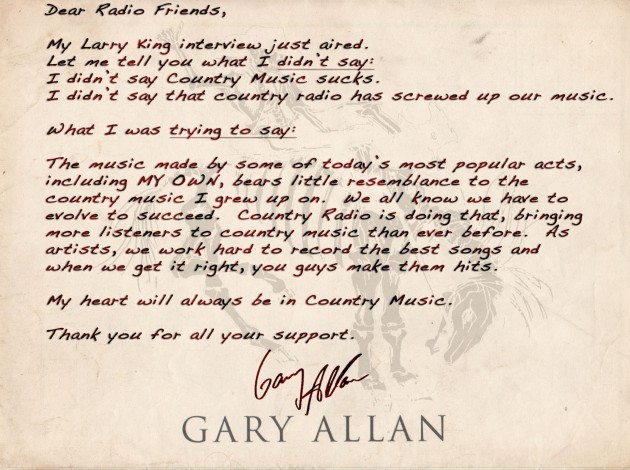