Gear Stolen from The Pistol Annies (well, kind of…) 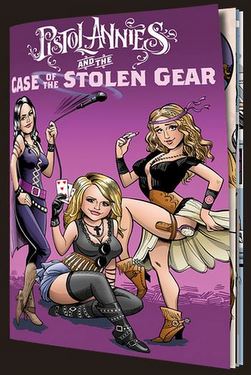 About right about now would be a proper time to cue up the immortal words of Sweet Brown and tell our dear friends The Pistol Annies “Ain’t nobody got time for that!”

Earlier today the bawdy trio launched an interactive, animated, content-unlocking, grab-your-contact-info-so-they-can-bombard-you-about-sparkly-pink-merch-in-the-future internet timewaste as part of the advertising run up to their upcoming album Annie Up to be released May 7th. The interactive internet experience begins with a comic book-style storyboard that explains how the Annies’ arch nemesis, record producer Cassius Banks steals their gear with the help of his “flavor-of-the-month” band The One Tones.

Where does it go from there? That’s for you to find out if you care more than I did to whip the ass of your Facebook friends / Twitter followers by reposting links to “unlock” the next three installments of the comic. I on the other hand quickly awoke to the realization that I’m a grown ass adult and have better things to do than oogle at comics during the middle of a Wednesday. The whole exercise seemed like the modern-day equivalent of straining through the 80’s-era television static of a blocked cable channel trying to spy the distinct outlines of a female nipple, with the “nipple” being this supposed “exclusive content” the experience promises to convey. Seriously girls, just give us the goods and get on with it.

Spoiler Alert: Though I did not take the time personally to reach the end of The Pistol Annies new interactive animated internet adventure, knowing the horrifically-predictable progression of American storylines, I can garan damn tee you The Pistol Annies get their gear back, and the evil Cassius Banks and his flavor-of-them-month band The One Tones are vanquished, and Castle Grayskull is once again saved from the evil forces of Skeletor.

I give The Pistol Annies and their marketing team an A for effort, but as I have said about them before, with the dress, some of the songs, and some of the other elements that surround this band, it sometimes is hard to take them seriously. Is this a bit, or a band with serious substance as they’ve been sold by so many country music critics?

So seriously ladies, if you have some new content to share with folks, just share it. It’s 2013 and we’ve all got shit to do. And nothing short of animated nipples will stimulate me to sort through comic book shorts and voluminous link sharing to see them.

Go On The Pistol Annies “Annie Up” Adventure