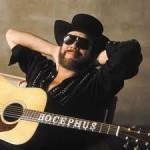 Or at least it would appear that way from a video recently brought to the attention of Saving Country Music.

Shortly afterward Hank3 talked to the President of the Opry, who Hank3 says told him, “We’ll never reinstate a dead guy.” In February of that year, an online petition was started to Reinstate Hank that now boasts over 50,900 signatures, including the signatures of Hank3, and Hank Jr’s daughters Hillary and Holly. But Hank Jr’s name remains conspicuously absent, and his public affiliation or support of the movement was thought to remain absent as well.

Hank3 and Hank Jr. have always had a strained relationship, and it became even more strained years later on a night when Hank3 was playing at The Bluegrass Inn on lower Broadway in Nashville, while Hank Jr. was down the road, performing at The Opry. Hank3 talked about the exchange of text messages that happened that night in the book Family Tradition: Three Generations of Hank Williams.

What I actually said was, “I hope you find somewhere else better to play than The Grand Ole Opry, until they show respects to your father.”  And Hank Jr’s reply was, “Well, I’m done with The Opry.”

Shortly thereafter, Hank Jr. and Holly were asked to perform at the Country Music Hall of Fame as part of their ongoing exhibit “Family Tradition: The Williams Family Legacy”. In the video below, Hank Jr., under his purple long sleeve shirt, is clearly sporting a Reinstate Hank shirt, like the ones sold at Hank3 shows.

Hank Jr.’s song “The Conversation”  carried the first public outcry for how the Grand Ole Opry had handled the late and great Hank Williams.

Back then they called him crazy, now a days they call him a saint
Most folks don’t know that they fired him from the Opry
And that caused his greatest pain

But for 5 years, for whatever reason, Hank Jr. remained silent about his son’s Reinstate Hank mission. He still might feel the need to veil his true feelings as a high-dollar, high-profile legacy country music celebrity franchise. But when you look deep down in Hank Jr.’s chest, you can tell where his heart is.

Thanks to Adam Sheets of No Depression for alerting me to the video.