The year was 1938, and a delivery truck driver for Hormel Meats named Braxton Schuffert stopped by the boarding house of Lilly Williams in Montgomery, Alabama to make a drop off. After unloading the parcels, Braxton Schuffert noticed a 1/2-sized guitar sitting in the corner, and took a moment to pick out a few songs before continuing on his route. “Hiram, he’s got you beat,” Miss Williams called out to the back room to a 15-year-old boy. What transpired next would help result in that 15-year-old boy becoming country music’s first superstar.

“As I was walking out I heard this voice that was just as strong and clear,” Braxton Schuffert recalls.  “It was a man’s voice in a boy’s body. Hank was only 15 at the time, but he could sure sing. Even then I knew he had a one-of-a-kind voice.”

Braxton Schuffert was a local musician in Montgomery that had his own band and a standing gig at local radio station WSFA where he would play and sing, just him and his guitar every morning from 6:00 – 6:30 AM before his Hormel deliveries. Since school was out at the time, Shuffert asked young Hank if he wanted to come with him the next day on his deliveries. “I told him we’d sing all day. That’s all he needed to hear. He was for anything to do with music.”

Whether you want to go as far as to say Braxton Schuffert “discovered” Hank Williams depends on your perspective, but that Hormel delivery driver was certainly seminal to setting Hank Williams on the path to super stardom, shepherding the young man as a musician and songwriter, making critical contributions to the rise of Hank, and helping Hank as a close friend all the way up to his death in 1953. “I’d like to say I helped him out, but I didn’t give him that voice and I didn’t teach him to write those songs. That’s something you get from God.” 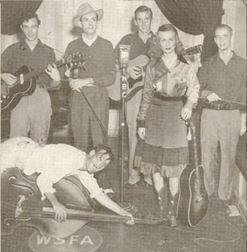 But Braxton was vital to helping get those songs and that voiced noticed, opening up Hank’s very first opportunities as a professional musician. After swapping songs and licks in that Hormel delivery truck, Schuffert felt comfortable enough with Hank to put him on his WSFA radio show as a guest. This was Hank’s very first appearance on the public airwaves. Schuffert played guitar for Williams at his first ever official performance at the Georgiana High School, and then his first appearance in an auditorium, the Ritz Theatre in Greenville, Alabama. “That show at the Ritz was the first show Hank ever booked. After that we played in pretty much every theatre in Alabama and Florida.”

One of Hank Williams’ first songs “Rockin’ Chair Daddy” was co-written by Schuffert. As Hank began to get bigger, Braxton helped form Hank’s Drifting Cowboy band, and was a revolving member of the band and was part of Hank’s inner circle throughout the country star’s career.

On January 30th, 1952, when Hank needed a ride to play a New Year’s show in Canton, OH, Braxton Schuffert was the first person he asked. But Braxton couldn’t do it. Because even as Hank Williams rose to the very heights of stardom, Schuffert stayed in Alabama, loyal to Hormel where he worked for over 42 years. Hormel was the sponsor of that WSFA radio show Hank Williams made his first appearance on, and another show on WCOV Schuffert performed on. Hank would never make it to Canton, OH. He died in the back of his powder blue Cadillac in Oak Hill, West Virginia. Braxton Schuffert was one of the principal pall bearers at Hank’s funeral.

Braxton Schuffert was his own accomplished country music singer, and worked to help keep the legacy of Hank Williams alive, performing as lately as last year’s 33rd annual Hank Williams Festival in Georgiana at the age of 96. Schuffert has his own display case at the Hank Williams Museum.

“Hank loved the Lord, and I loved Hank. He made country music what it was. This alley-cat music they play these days ain’t country music. Country music is simple. It reaches out and touches your heart, touches your soul. Hank was able to touch people better than anyone I’ve ever seen.” — Braxton Schuffert