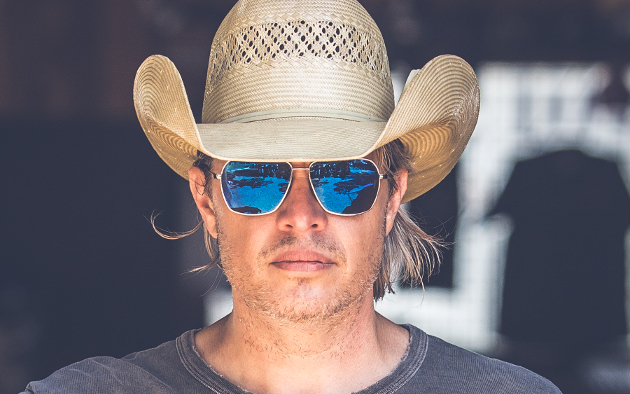 The man who’s most responsible for keeping the traditional country backbone in Red Dirt music strong and rigid for many many years is probably not the one your would finger as being the most enigmatic of all the founding fathers. But that’s exactly what Jason Boland has become as his mane has gone silver, and his career has now stretched to 20 years of service. This is a guy that has a tattoo on his forearm that quite literally says “Forearm,” after all. If you mistakenly thought there wasn’t a thinker in there, or someone not apt to screw with us all if he so chooses, you’ve been missing out on the full breath of the Jason Boland genius.

He’s keeping us on our toes, that’s for sure. Boland’s last record Squelch was still country from a musical standpoint, but it was full of these deeper messages embedded in the songwriting, with vocals that almost seemed purposely buried in the mix so you had to hunt down a lyric sheet to really understand what was going on. For a guy that first made his name singing about cheap bourbon whiskey and pearl snap shirts, Boland was tasking his audience to think, and work. Ultimately Squelch may reveal itself as the hidden magum opus of his catalog. But as often happens with those type of projects, they can be misunderstood in their time, and sometimes take years to reveal their genius.

Many loved Squelch. Others it went zinging over their head, and so they potted up “Somewhere Down in Texas” or “Pearl Snaps” and forgot about it. But what would Boland do next? We’re living through the most weighty and contentious time in society since Jason Boland started singing, and with the direction Jason had pointed his nose in Squelch, you could expect his new record to be yet another cranium exercise for sure, especially with a title like Hard Times Are Relative.

But that what we would expect Jason Boland to do, and he can’t have that. Instead he releases possibly one of the down home and grounded traditional country records that we might hear all year. It’s almost as if Boland is saying, “Oh, you think you’ve got me figured out?  You want songs that stick to your ears on the first listen? Fine then, I’ll put out one of the most badass traditional country records possible,” while making it all look stupidly easy. 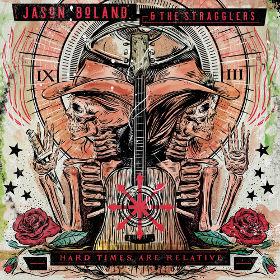 From the word ‘go,’ Hard Times Are Relative is exactly what you want from a middle career release from a band like Jason Boland and the Stragglers. From the first song with Sunny Sweeney—the sweet and swaying “I Don’t Deserve You” with its “When Will I Be Loved” vibe— and then right into the title track, this is the type of table-thumping stuff that makes you proud and happy to call yourself a true country fan. And this is Jason Boland we’re talking about, so you’re not staring at some publicist-provided biography pic, wondering if this guy really cares about country, or if he just following the hip country trend while trying to get laid in east Nashville, only to break your country-loving heart down the road by cutting an indie rock record.

This doesn’t mean Boland doesn’t get deep, or weird, or doesn’t make you think by laying stuff between the lines or getting clever in the songwriting. It’s just a lot more accessible this time, and the songs immediately beg for a repeat. What’s so cool about the song “Hard Times Are Relative” is there’s a lot interwoven in those lyrics, but it still works like a traditional country song where the double meaning of words are utilized to drive a message home. There’s heartbreakers, reminiscent songs, even a song with a little bit of protest in it about the state of country, “Do You Remember When.”

Not to keep bringing this back to Boland’s previous record, but when listening to Squelch, you got the sense perhaps Jason was getting a little bored with the “three chords and the truth” approach to songwriting. It all was feeling a little trite perhaps, and that’s honestly not an unfair assessment of some guys after they’ve released a career worth of records. But now with Hard Times Are Relative, you know Boland was just freshening up, or recharging the batteries so to speak, so that when he did go back to writing more straight ahead country songs indicative of his early career, there was passion and invigoration there as opposed to going through the motions to serve listeners what they want.

Most every Jason Boland record has a rock song on it, and on this one it’s “Dee Dee Od’d.” Dee Dee’s not the local meth head, it’s in reference to the bushy-headed bass player of The Ramones. Jason and The Stragglers also stretch the sonic parameters a bit on one of the albums most interesting tracks, “Grandfather’s Theme,” though the over-the-top dissonance at the end of an otherwise melodic conquest might be one of this record’s few hiccups.

A mid-career record from a guy like Jason Boland can get easily overlooked. It won’t create all the buzz of the younger guys, and it’s not like he’s at the Willie Nelson or George Strait level of legendary status at this point. But Hard Times Are Relative will most definitely go down as one of the best true country releases of 2018. It’s easy to love, and ol’ Boland has kept things interesting, yet still grounded to where the whole experience feels fresh and smart. It’s fun. It’s touching. It makes you think. It keeps you interested and entertained by delving into a range of emotions. And it’s country. It’s Jason Boland and the Stragglers.