Those who don’t know the name soon will. Those who do know the name have probably been wondering why it’s been so long getting here. But the moment has arrived for Jason Hawk Harris to go from an obscure country songwriter and performer, to a name to look out for. With a touch of punk attitude and darkness, and a proficiency with melody and composition not always found in country, Jason Hawk Harris put himself on the radar of some with his 2017 EP Formaldehyde, Tobacco, and Tulips, and he’s about to arrive on the radar of many more.

A Houston-raised performer known to some as a member of the Los Angeles-based indie folk outfit the Show Ponies, Jason Hawk Harris signed to Bloodshot Records in November of 2018, and is readying the release of his debut solo LP Love & The Dark on August 23rd. He was exposed to classic country early on by his grandfather, but like so many of us, Harris fell out of favor with the format when all he could find for today’s country is what they’re playing on the radio. So he got into other styles and started studying classical music, and was on the waiting list to pursue a Masters Degree at UCLA in classical composition when he fell in with the Show Ponies, and then starting writing his own solo material.

A bad string of circumstances sidetracked Jason Hawk Harris for a while, including his mother dying from complications of alcoholism, his father going bankrupt after being sued by the King of Morocco of all things, and his sister was diagnosed with multiple sclerosis and gave birth to a premature son with cerebral palsy. But perseverance and a true passion for the music saw the completion of Love & The Dark, while also helping to inspire the true-to-life struggles and stories contained in the album’s nine songs. 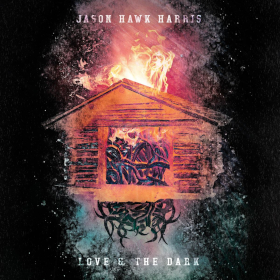 Jason Hawk Harris was discovered by Bloodshot Records at the Folk Alliance Conference in Kansas City in 2018 (where Saving Country Music also first saw him), and soon he was touring with current Saving Country Music Album of the Year winner Sarah Shook and the Disarmers who share many of Jason’s passions for country that is true to the roots of the music, but imbued with a punk perspective and melodic sensibility. This can be heard in the debut song from the new album “Cussing At The Light,” which carries that classic country theme, but with with a contemporary perspective.

Jason Hawk Harris is definitely one to keep an eye out forin the releases due later this summer. Love & The Dark is now available for pre-order.