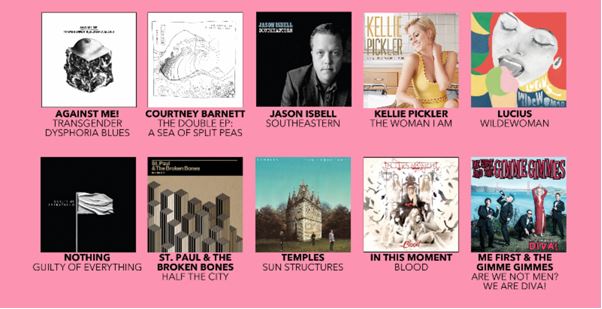 Some of your favorite music from the country world and beyond is going pink on September 30th to help spread awareness and raise money for those suffering from Breast Cancer as part of the music world’s contribution to Breast Cancer Awareness Month this October. Red Distribution and Gilda’s House are partnering to offer “Ten Bands / One Cause” limited edition pink vinyl releases with proceeds going to Gilda’s House. Jason Isbell’s Southeastern, Kellie Pickler’s The Woman I Am, St. Paul & The Broken Bones’ Half The City, and seven other worthy projects will receive the pink treatment, and all are now available for pre-order.

“I love this idea,” says Jason Isbell, whose song “Elephant” from Southeastern tackles the Cancer issue head on with a courage and honesty rarely seen. “I’m in favor of anything that raises funds or awareness of this issue. Plus, it makes me feel like one of those cool ballplayers with the pink bats.”

Against Me!, Courtney Barnett, Lucius, Nothing, Temples, In This Moment, and Me First & The Gimmie Gimmies are also participating in the pink-colored promotional campaign. Many outlets are offering free MP3 downloads with the vinyl purchase.

Gilda’s Club New York City was named for Gilda Radner, the brilliant comedian and one of the original cast members of Saturday Night Live. Gilda was diagnosed with ovarian cancer in 1986. Following her death in 1989, Gilda’s husband, Gene Wilder and her cancer psychotherapist, Joanna Bull started the Gilda’s Club movement. In June, 1995 GCNYC opened its signature red door Gilda’s legacy to everyone living with cancer. Since opening, it has offered a place where men, women and children living with cancer and their families and friends can join together to build social and emotional support as a supplement to medical care.

“We have resources to help Cancer patients and their families learn how to live with their Cancer experience through our support groups, educational lectures, and classes,” says CEO Lily Stafani.

Pre-Order Kellie Pickler’s Pink Vinyl The Woman I Am