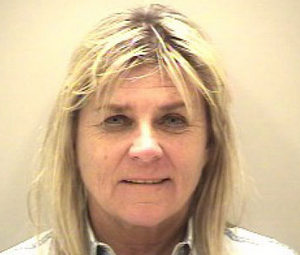 Jett Williams, the daughter of country legend Hank Williams Sr. and the half-sister of Hank Williams Jr., was arrested early Tuesday morning for DUI in Lebanon, Tennessee. The 61-year-old Jett Williams Adkinson was observed by Lebanon police swerving in between lanes in a 1998 Jaguar when police pulled her over at 2:30 AM. According to police, Jett smelled of alcohol, and had slurred speech and admitted to drinking two beers. She failed a field sobriety test, and was arrested.

Williams was also cited for not wearing a seat belt and for no proof of insurance. She was later released from the Wilson County Jail on $1,000 bond. According to police, her current address is Hartsville, TN, just north and east of Lebanon.

Jett is a country music performer and the co-executor of the Hank Williams estate. She is the daughter of Hank Williams Sr. and Bobby Jett, who Hank had a brief relationship with between his two marriages. She was born five days after Hank’s death, and was adopted by Hank’s mother, Lillian Stone after her birth. When Lillian passed away in 1955, Jett became a ward of the state before being adopted, and lost touch with her Hank Williams lineage. In 1985, she was found by the Alabama State Court to be the daughter of Hank Williams, and was awarded a half-share of the estate. Jett’s husband, lawyer Keith Adkinson, died in June of 2013.