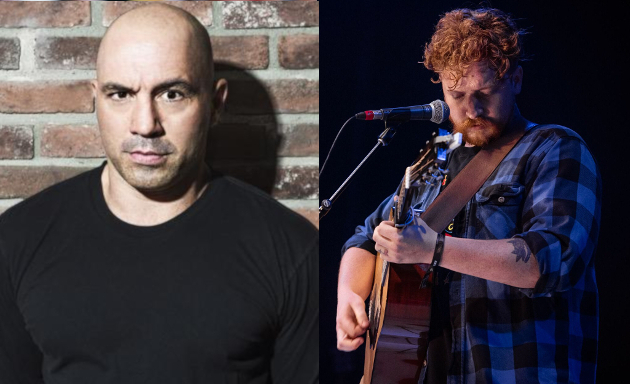 Joe Rogan and his mammoth podcast reach more people than most cable shows these days, and his ringing endorsement of music artists over the years has directly resulted in the rise of important careers, most notably Sturgill Simpson, whose appearance on the podcast right after releasing his magnum opus Metamodern Sounds in Country Music is given credit for his ascent.

Recently Rogan has been singing the praises of Tyler Childers, who had his last two records produced by Simpson, including his most recent Country Squire. Since Sturgill has appeared on Joe Rogan three times, many wondered if Tyler might stop by at some point. Whether he does or not, Joe Rogan is a fan.

In an Instagram post in August, Joe Rogan said, “This Tyler Childers album is fucking great. I’ve had it on a loop for the last few hours,” with a picture of Tyler’s 2017 album Purgatory as the image. Then this weekend, Rogan posted a picture of Tyler’s track “Honky Tonk Flame,” saying, “My song for the day.” It’s a little curious why Rogan continues to give so much love to Tyler’s last record as opposed to his new one, but something tells me Tyler doesn’t care.

So the next question fans of both Tyler Childers and Joe Rogan have is if or when Rogan will have Childers on for one of his mammoth, 2-hour-plus podcast sessions. So far there’s no word on that front (Rogan likes to be a little secretive about who he might have on next), but don’t be surprised if it pops up in your podcast/YouTube feed at some point. If Rogan is giving props to Childers on social media, it’s for sure he’s a fan.

Tyler Childers is touring in Southern California in mid October where the Joe Rogan podcast emanates from, playing San Diego on October 15th, and at The Wiltern in Los Angeles on October 17th. Hopefully the stars will align and Rogan will have him on.

Tyler Childers’ Country Squire went #1 in country, and #1 in all of music in physical sales upon its release on early August. He continues to sell out shows left and right (including those upcoming shows in Southern California).