Just Say NO to Miley Cyrus & Disney! (A Rant) 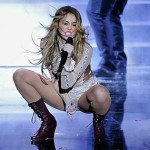 Indulge me here ladies and gentlemen, because I need to get something off my chest. I can’t in good conscience sit around tight lipped anymore as the youth of America are stultified and our young women exploited by these assholes over at The Disney Company.

So let me get this straight: every day millions of youth are exposed to Disney’s uber consumer-breeding, attention span-eroding, mind-numbing, over-glossified, culture-homogenizing propaganda via the electronic babysitter known as television because their parents trust Disney to raise their children better than themselves. But when you look at the children of Disney, aka Miley Cyrus, Brittany Spears, Demi Lovato, and Lindsay Lohan to name a few, it looks like a Hollywood police lineup.

I don’t even understand what the hell is going on here. There should be widespread national outrage. People should be piling up Disney products in heaps and starting bonfires in protest, like they used to do with rock albums and pornography. Instead people are voyeristically glorifying the sluttification of an American icon who millions of little girls look up to, and continuing to willingly hand their children over to these monsters in lieu of true parental guidance and/or interaction. Our culture is so obsessed with youth, glitter, and fame, that all the women want to be Miley, and all the men want to fuck her, and her recent behavior only fuels the flame.

I’d rather have Darrell the local dime bag dealer come peddling to my offspring than expose them to Disney products. We should purge anything with mouse ears out of our society. We should push them out of our homes and communities. You can see the drug pusher for who he is. Disney is like the wolf in sheep’s clothing, the Trojan horse that comes into your home packaged as a holiday special 2 DVD combo with bonus footage, that turns your daughter into a slut with substance issues, and your son into a rapist starter kit in an Affliction T-Shirt.

The irony is thick when you have a foul-mouthed, anti-censorship asshole like myself teaming up with folks like the “Parents Television Council” to preach morality. But I don’t want Uncle Sam to take action, WE must take action. The tranquility of suburbia must be disturbed. Our young women must learn to respect themselves, because nobody else will. This is a fight for the souls of our daughters, and John Q Public can’t divest themselves from their boob tube and other beeping electronic devices giving them Miley updates long enough to appreciate this!

Hell, I don’t even have a daughter, and thank God for that.

Disney has blood on its hands. Their rabid yearning for profits is what led to the personal destruction of a girl who despite all her personal flaws and the illegitimacy of her popularity, is still a human. Let’s stop focusing on the effect, and mitigate the cause. I don’t even understand why Miley Cyrus exists as she does in the public conciseness. She has no talent. If it wasn’t for Disney manufacturing an otherwise heroically average girl, she would be taking her bong hits with the remedial class-skippers behind the gym after 6th period.

So I say fuck Disney. It’s time for action. When it comes to their Disney products, we need to start a new campaign for the safety of our children: JUST SAY NO. Friends don’t let friends do Disney.

I’m not any better than Miley Cyrus, Billy Ray Cyrus, or those assholes who pull the strings over at Disney. What sets us apart, and what makes me feel infinitely blessed, is that I have awakened from the suffocation of the mass media of which Disney is the biggest single entity of. Disney can’t control me, because I don’t want their stupid plastic shit, or their dumb over-formulated story lines, or their animated 3-D garbage, or action movies that insult my intelligence.

Your magic doesn’t work on me Disney.

Watch this heroin sheik bullshit done by a then underage Miley, and tell me why it doesn’t deserve to be doused in gasoline and torched.

ALL HAIL THE RISE OF THE RAUNCH CULTURE!