The saga of country artist Katie Arminger continues, and the accusations against her record label Cold River just reached a new level.

The issue began in June of last year when the 23-year-old Houston native found herself locked out of her social media accounts, right after her label announced to the world that she had decided to take a “breather” from country music. Her label Cold River released a statement saying, “It has been the thrill of a lifetime to work with her and watch her blossom into one of the best singer-songwriters of her generation. Katie is a special talent and an even better person. As a label, we love her and support her decision and we will always be her biggest fans. To our radio partners, we thank each of you for your support and friendship through the years.”

However according to Katie, she had decided no such thing, and as she tried to explain to her fans what was truly going on between her and Cold River, she got forcibly locked out of her social network accounts by the label. Katie finally relayed a couple of messages out through her Instagram account, but only to have those removed shortly as well. 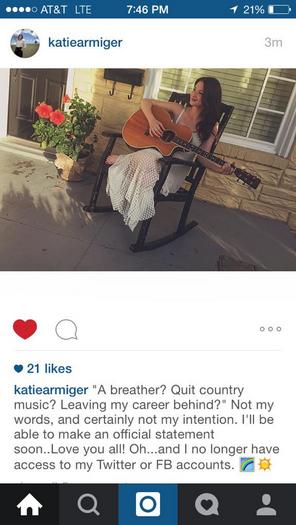 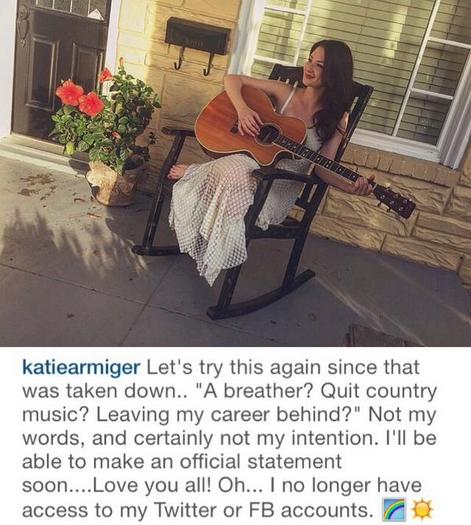 As you can imagine, the entire battle has ended up in the courts, but today (1-27), Katie broke her silence, releasing a statement about what happened.

I never quit country music. I haven’t spoken because I wasn’t able to. My label filed suit against me, but I kept hoping for an amicable solution. Now, everyone can see my response. The answer I filed with the federal court speaks for itself. I’ve worked hard and I’m proud of what I’ve done musically and personally. My label had expectations for how I should behave to get ahead, particularly how I should interact with influential men in the industry. I just wasn’t willing to take that approach. I wanted to make it with integrity and I still do. I know that there are good people in this business and particularly in country radio, and I’m so grateful to those who support my career and play my music. I didn’t think I should have to do the things my label wanted me to do to ‘make it.’ It should be about the music. I’m eager to share some new music very soon. I love country music. This is where I want to be.

Most alarming was Arminger’s assertion that she “should interact with influential men in the industry.” Though no further explanation was given in her initial statement, the practice of entertaining influential members of the country radio industry, including some who have been known to either touch, or in some cases, grope young female stars has been an accusation against the country music radio industry for many years. An episode of ABC’s drama Nashville dealt specifically with the issue. Numerous artists, including most recently Taylor Swift, have accused DJ’s of groping them.

Though Arminger said in her statement, “Now, everyone can see my response,” that court response was not made available to the public. However Saving Country Music has obtained a copy of the entire 45-page response (see below).

Cold River’s President Pete O’Heeron fired back later in the day with a statement of his own:

Cold River is saddened and disappointed to learn of Katie Armiger’s malicious and completely false statements against the label. It is interesting to note that this story never surfaced until Cold River was forced to sue Ms. Armiger for refusing to perform the remainder of her contracts with the label. Certainly, Ms. Armiger never made these false and malicious claims when Cold River was pouring a tremendous amount of money into promoting her career. It appears that Ms. Armiger is simply attempting to use these false claims to get out of her contracts and to gain publicity for her career, at Cold River’s expense. Her assertions are completely without merit and fabricated.

In addition, while Ms. Armiger complains that Cold River promoted her career by focusing on her appearance rather than purely her music, it should be noted that, since refusing to perform the remainder of her contracts with Cold River, Ms. Armiger and her new “team” have actively campaigned for her to become Country Weekly’s Hottest Bachelorette. This paradoxical behavior belies the sincerity of Ms. Armiger’s claims and further evidences that she is simply trying to get out of her contracts with Cold River and generate free publicity for her career. Cold River looks forward to clearing its name in court and, when that day comes, hopes that Ms. Armiger will be as vigorous in apologizing to the label as she was in smearing its name.

Katie Arminger’s Response to the Lawsuit

Pete O’Heeron, the President of Cold River, filed a civil lawsuit against Katie Arminger on December 28th, 2015 in the Federal Tennessee Middle District Court in Nashville. Arminger is Pete O’Heeron’s first cousin’s daughter. In the original lawsuit, Pete O’Heeron accuses Katie of breaching numerous stipulations of her contract, and claims that she owes the label relief for advances and promotional costs tied to her career.

Arminger counter-sued O’Heeron and Cold River, and after the two sides have attempted to resolve the issues out-of-court, she has now asked for a jury trial. Arminger was first signed to Cold River in 2009 when she was a minor. In 2010 when she was 18, she signed a second contract, but it was when she was still being managed by Pete O’Heeron, potentially creating a conflict of interest. Arminger says she was told the contract was “no big deal,” and did not have proper representation present to sign it. However she still claims she did not violate the stipulations of the contract, and instead countersued Cold River due to accounting issues and unpaid revenue.

The entire 45-page response can be read by CLICKING HERE. Excerpts of the lawsuit response and countersuit can be found below.

On Arminger Being Asked to “Sex It Up”

Prior to Ms. Armiger’s most recent Radio Tour, O’Heeron gave Ms. Armiger money to purchase “hot” “game changing” clothes that would “make their [Radio Program Directors] eyes call [sic] out of their heads.” O’Heeron requested that Ms. Armiger send him photos of the clothing she was considering purchasing so that he could make sure the items were “hot” enough.

O’Heeron suggested that Ms. Armiger hug, kiss, and flirt with Radio Program Directors. O’Heeron told Ms. Armiger that she needed to “play a role” with Radio Program Directors. He described what he meant by saying, “It’s like an actress or an actor saying I’m not going to go into that brothel on screen because I don’t want people to think that I go into a whorehouse.”

O’Heeron allowed and enabled his employees to comment on Ms. Armiger’s sexuality and appearance, and to ask her to hug, kiss, flirt with, and sit in the laps of Radio Program Directors, despite Ms. Armiger repeatedly stating that she was uncomfortable with such comments and suggestions.

Ms. Armiger denies that O’Heeron “requested that [she] contemplate the decision and that she speak to others before moving forward” and denies that she “said that was not necessary.” Ms. Armiger admits that O’Heeron warned her that “when you unplug this from the wall, it will never, ever be plugged in again. This is a turning the lights off on your career,” however, she denies that it was her decision to “unplug” her career.

Ms. Armiger admits that O’Heeron cited one example of another artist, Cyndi Thompson, who was unable to return to a professional singing career after she encountered trouble with her label, but denies that the two situations are analogous. Ms. Armiger also admits that she spoke to Jim Dandy, Vice President of Promotions at Cold River, on June 15th after her conversation with O’Heeron occurred. Ms. Armiger again denies that she ever intended to “quit” or said she intended to “quit.”

During the telephone call that occurred between Ms. Armiger and O’Heeron on June 15, 2015, O’Heeron told Ms. Armiger,“I’m so ready to pull the plug on this.” During that same conversation, O’Heeron asked Ms. Armiger, “So if we shut this down tomorrow, what are your plans,because I’m not going to continue to invest money in it.”

Ms. Armiger admits that she sought help to recover her social media accounts after O’Heeron “pulled the plug”on her career,but denies that these actions constitute a breach of any agreement or trademark infringement. Ms. Armiger further asserts that Cold River is no longer authorized to exploit the “Katie Armiger” mark or to operate and control any of her social network sites.

Ms. Armiger denies that Cold River currently has the right, exclusive or otherwise, “to operate and control any so called social network sites relating to Armiger, including the verified Twitter Account”
referenced in Plaintiff’s Complaint.

On the Breach of Contract