Ke$ha Will Be A Force In Country Music (& work w/ Hellbound Glory?) 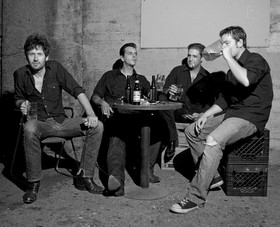 Reno, Nevada’s Hellbound Glory just finished up a big 6-week tour, and behind them they left a trail of rumors that a future album might have a contribution from electro pop star Ke$ha. Apparently the band met Ke$ha just after coming off another tour and hanging out at their favorite Reno bar called The Hideout the same night Ke$ha was in town playing a show. It still seems somewhat uncertain if the collaboration will actually happen, and if it does, it probably wouldn’t be a full blown duet with Hellbound Glory frontman Leroy Virgil, more just a female backing vocal track.

But all of this Ke$ha talk rekindled a fascination I had with the pop star and her country aspirations about two years ago. Certainly in my world, the meteoric rise of a pop star will not light a blip on my radar…until the rumors of them wanting to “Go Country” forces me into duty, sniffing around on celeb-pop websites like a ravaged beagle in an overturned trash can, squinting my eyes at glittertext, wading through pop-up ads for pimple creme and Southern California-based reality shows to try and substantiate the “Gone Country” claims. 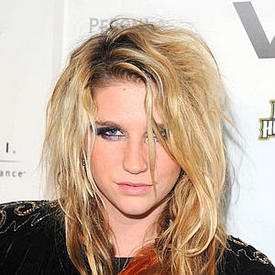 “I’m really inspired by country music–my mom wrote country music–and I love Dolly Parton and Johnny Cash. I think at some point there might be some country collaborations or records in the future.”

Earlier in 2010 she told popeater.com:

I think people should know the classics — Johnny Cash, Dolly Parton, also Townes Van Zandt, I’m a huge fan of him. [Bob Dylan’s Nashville Skyline is] one of my favorite albums of all time, because I grew up in Nashville, and so everything about that record is really special to me. When you listen to that record, especially on vinyl, and you’re either falling in love or waking up after a long night and you’re with all your friends, it just brings up a lot of nostalgia.

Pop stars positioning themselves for a country move by claiming they’ve always been into the music is nothing new. The difference with Ke$ha though is her references to her country roots and influences are actually true. Two years ago I wrote a whole article about how Ke$ha could become a huge force in country music but never published it, probably worried it would be misunderstood. Though on a later post about Lady Ga-Ga “going country” I claimed, “the pop star you really need to worry about going country, is Ke$ha. Mark my words.” And later in the comments explained why, how Ke$ha’s past was rooted in country.

Ke$ha’s mom is a country songwriter by the name of Pebe Sebert. Her song of note is Old Flames (Can’t Hold a Candle To You), which became a hit for Dolly Parton, Merle Haggard, and Johnny Cash. Pebe Sebert did not start off in country though. She was a singer in a punk band, and then wrote the hit song “as a joke” according to Kesha in an interview with Ryan Seacrest. Pebe moved from LA to Nashville in 1991 after signing a songwriting contract when Ke$ha was still very young.

Ke$ha grew up in a songwriting environment, surrounded by music, and was taught how to play and sing at an early age. The story goes that as a baby, Pebe would put Ke$ha in a guitar case on stage while she performed. As Ke$ha grew, they would write songs together. A young Ke$ha and mom Pebe appeared in an episode of the TV show “The Simple Life.” Through the dumb reality TV plot, you can get a good reading of what kind of person Pebe is. Ke$ha was a good student and scored “near perfect” SAT numbers before dropping out of high school to pursue music in LA.

Ke$ha got involved with high rollers in the LA music scene, the whole time she was writing her own songs, citing Dolly Parton, Johnny Cash, and classic country as big influences. Ke$ha is a strong singer, has appeared on a number of pop and hip-hop albums singing backups and harmonies, and has written songs for other pop stars including Brittney Spears and Miley Cyrus.

However when her debut album Animal came out, it was described by critics as the most predictable, un-apologetically pop-oriented ultra-catchy album put out in years. Of course, the spoon fed public ate it up. The debut song Tik Tok was a #1 hit in 11 different countries, and became the longest running number one debut single by a female artist since 1977. When questioned about critics, Ke$ha bristles, citing how she writes all of her songs, and is just “having fun” right now.

Even during Ke$ha’s mega success and worldwide tours, she’s still collaborated with other artists. It was her contribution of backing vocals on rapper Flor-ida’s hit “Right Round” that put her in the pop spotlight to begin with, though she didn’t get paid a dime for the contribution. That is when she adopted the “$” in her name, to be ironic, because even though she was well-known, she was living out of the back of a Lincoln Town Car in LA.

Since then she’s established a trashy persona that celebrates bad tattoos, mullets, Tran-Am’s, and reckless behavior. Though on the outside Ke$has seems sincerely pop, some have given her credit for mocking the system with her songs and persona, an anti-pop star so to speak. She publicly distances from the Paris Hilton party scene, and very well may be playing the pop world from the inside, writing stupid, catchy songs to prove a point while cashing in financially. If there was ever a Trojan Horse of the pop world, Ke$ha would make a good candidate.

The question isn’t if Ke$ha will go country, only when. But it won’t be on her next album due out later this year, self-described as guitar-driven “cock rock” that “capture(s) some of the true essence of what rock and roll is, and that’s just irreverence and sexiness and fun and not giving a fuck.” Hellbound Glory would be Ke$ha’s first country contribution, but you can bet it wouldn’t be her last.

I’ve said it before and I’ll say it again, Ke$ha will be a force in country music.