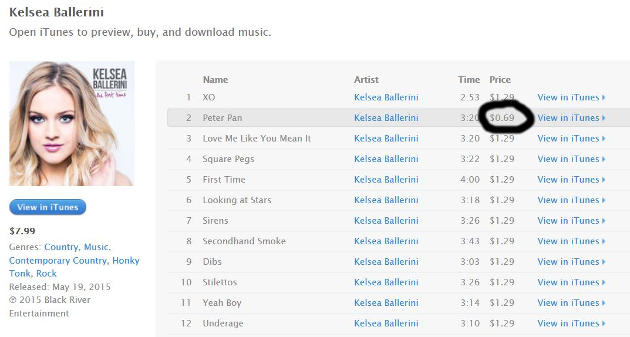 Publicists for pop star Kelsea Ballerini and her label Black River Entertainment are fawning all over themselves this week for their “historic” achievement of getting the single “Peter Pan” to inhabit the #1 spot on both Billboard‘s Country Airplay and Hot Country Songs charts simultaneously—the first time this has ever happened for a female. She’s also the first female to have her first three singles go #1. But a whole host of asterisks deserve to be assigned to this distinction.

First, the Hot Country Songs chart has only been around since 2012, meaning for the vast majority of the history of country music female artists did not have the opportunity to crest both charts at the same time. It’s pretty easy to assume that Shania Twain, Dolly Parton, Reba, Tammy Wynette, Loretta Lynn, Patsy Cline, and many other female artists would have done this in their eras if given the opportunity.

Also if you’ll remember when Billboard launched the new chart, there was a big uproar in how spins on pop stations would count into the Hot Country Songs metric, giving an unfair advantage to pop-leaning country artists like Kelsea Ballerini, while also stimulating other artists to lean more pop for more favorable charting performance. That critical rule to the Hot Country Songs chart is likely also why we’re seeing so many collaborations between country artists and pop stars recently. 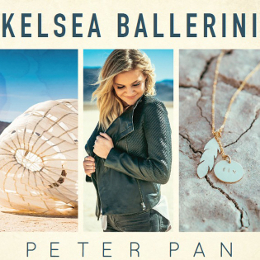 But most importantly, “Peter Pan” was helped on its way to #1 by a promotional feature on iTunes where labels make tracks available for $0.69 (instead of the regular $1.29), which boosts sales, boosts chart performance, which in turn can boost radio play after radio programmers see how hot a single is performing, ultimately artificially inflating the interest behind a song that charts are meant to gauge.

And you don’t have to go any farther than Billboard itself to corroborate this phenomenon.

In an article published on 9/8/16 and written by Ed Christman entitled, “iTunes’ 69-Cent Discount Songs Drive Chart Positions and Radio Plays — For a Price“, the strategy is explained in full:

Since its introduction two months ago, the “Great 69¢ Songs” section of Apple’s iTunes Store, the company’s latest experiment with song discounts at that price and which can be found halfway down the Store’s front page, has become one of label executives’ most closely watched promotion vehicles.

Hit tracks typically sell for $1.29 on the iTunes Store, but labels are finding that promising songs can receive a boost — at a cost — after being featured within the section, helping to keep a song on the radio when labels fear momentum is waning, and when would-be hits are percolating below the top 40, 30, 20 on various charts.

Kelsea Ballerini’s “Peter Pan” is one of the songs featured in this “Great 69¢ Songs” iTunes promotion.

The Billboard article goes on to present the case study of Shawn Mendes’ song “Treat You Better.” After being accepted to the promotional opportunity by iTunes, sales rose 66 percent, which in turn also significantly influenced radio play, while streams of the song stayed steady—meaning overall the public wasn’t going ga ga over “Treat You Better,” it was being artificially inflated by the iTunes sale.

One clear problem is the aforementioned “cost” of the section. A majority of songs featured in the slider lose money, one source says, telling Billboard the promotion can cost between $2,000 and $10,000 a week. If a record becomes a runaway hit in the week its featured, which can also be a costly revenue hit.

But if you can get your song to #1 and claim a “historic” victory, that might be a price worth paying, even though the promotional effort is devaluing the price of music in the long run, with songwriters receiving the brunt of the impact, while the name-brand music star reaps the promotional rewards.

And this is not the first time a discounted sales price has disrupted the continuity of the country charts in 2016. Texas country artist Cody Johnson would have been awarded the #1 album in country if it weren’t for Blake Shelton selling his album for $0.99.

If the female issue in country is going to be solved, it’s going to have to focus not just on gender, but on good music, and music appropriate to the genre. And songs from female artists have to be awarded distinctions without artificially inflating their performance like we have with “Peter Pan.”

Nice try, but the only thing historic about “Peter Pan” is how decidedly non country it is for a “country” #1 hit on multiple charts.