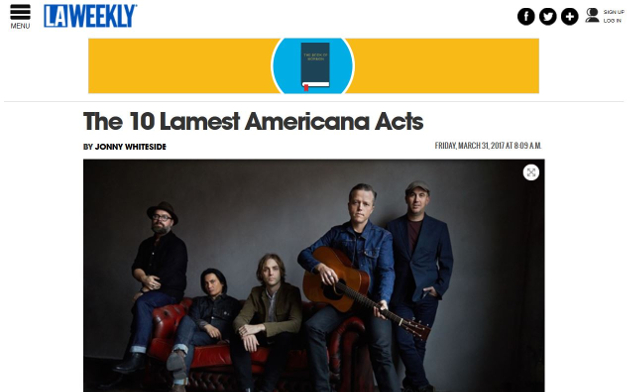 So apparently Americana and some of its top artists aren’t above criticism by a major media outlet. This is what the independent country and Americana communities had to face down on Friday (3-31) when an author by the name of Jonny Whiteside writing for L.A. Weekly published an article slamming some of Americana’s elite, including Jason Isbell, Lucinda Williams, Gillian Welch, and Shovels & Rope. Sam Outlaw, Jack Grelle, Wayne “The Train” Hancock, Red Dirt’s Jason Boland & The Stragglers, The Devil Makes Three, and Robert Ellis also found strong rebuke in the list-erific “10 Lamest Americana Acts.”

No, I’m not going to link to it here, because that would be irresponsible. But I’m sure you will seek it out. The L.A. Weekly editors are expecting you to. That’s why they posted it.

The first time I heard the name Jonny Whiteside, I was visiting the tiny home of Don Maddox just outside of Ashland, Oregon in 2012. Don Maddox is the last surviving member of The Maddox Brothers and Rose, and arguably the oldest living country legend in existence. While interviewing Don Maddox, I bemoaned how so much of his family history had gone unchronicled, when his wife handed me a copy of Ramblin’ Rose: The Life and Career of Rose Maddox. It was first published in 1997—a year before Rose Maddox passed away—and was the winner of the 1998 ARSC Award. The author was Jonny Whiteside.

Along with authoring another book on Johnnie Ray, recently posting an L.A. Weekly feature on Dwight Yoakam, and numerous other historical articles on country music and beyond, Jonny Whiteside regularly organizes a monthly showcase in Los Angeles at Viva Cantina with the theme of keeping the legacy of older music greats alive. In March the showcase was a Red Simpson tribute, and the legendary James Intveld was one of the performers, along with Red’s son David Simpson.

So the idea that this Jonny Whiteside guy is a snot-nosed Johnny-come-lately Millennial Los Angeles hipster angry that Vice wouldn’t give him a forum for his snarky bullshit is just not true. The fact that Whiteside has been working for years to help save country music and good American music in general makes this entire exercise that much more tough to stomach. Though I have never met Whiteside personally, he’s part of the extended family, and known for being overly opinionated, and a staunch supporter of the music.

The other part that’s hard to take is that portions of what Whiteside asserts is totally correct, and everybody knows it. Gillian Welch is a Manhattan-born and Los Angeles–raised artist trying to make authentic Appalachian music. Wayne “The Train” Hancock has been doing the same music with little to no variance for over 20 years. Jason Isbell can be boring and melodically-challenged to people who don’t appreciate music for the sheer poetry. And Lucinda Williams has been whining into microphones for over three decades.

But what Whiteside glosses over is the contributions all of these artist have made in their moments that have moved the canon of American music forward so incredibly. They could release white noise for decades to come and still deserve respect. It’s easy, and frankly, lazy, to only select out the character flaws or compromises to someone’s authenticity and shine a spotlight on those attributes while carefully avoiding to touch any and all of the moments of indelible greatness these artists have contributed to culture. Ultimately, shouldn’t this be more about the music as opposed to where someone is from, or what authenticity they may or may not have? Authenticity can be a great asset to music, but the music should still speak for itself.

Just take Wayne Hancock for example. I understand how someone could listen to his music and think it is all time stamped and anachronistic, and not worthy of ears in 2017. But if you had spent even a few minutes in the company of Wayne, you would know that this is a man that is completely lost in time, and sings from this by-gone perspective because it’s the only way he can relate to the modern world. Making fun of Wayne Hancock is tantamount to slagging the handicapped, and in print. Wayne Hancock can’t help but be himself, and Jonny Whiteside and L.A. Weekly seem to persecute him for that.

Criticism is a necessary and important part of the creative environment, and frankly, Americana has been able to skirt by virtually untouched by such pointed criticism previously, probably to an unfair degree because it’s the home to some many critically-acclaimed artists. The genre has been on an incredible run over the last couple of years, and continues to become a strong alternative to the mainstream, showing a clear ability to launch stars, and increase market share in a competitive environment.

With that success comes an elevated level of scrutiny, and this L.A. Weekly article is an example of that. Some think it’s now safe to criticize Americana because it is somewhat insulated by its success. We’ve seen this in the specific careers of Sturgill Simpson, Jason Isbell, and Chris Stapleton recently. To independent artists, sometimes the biggest adversity to their careers is success, because to some independent-minded fans, accomplishment is uncool. There is some mediocrity and monotone boring-ness within the ranks of Americana artists, including some of the most successful ones, and including some of the ones on Whiteside’s list. But to present a laundry list of grievances without any context of accomplishment or influence is irresponsible to readers, to the music, and to the communities both L.A. Weekly and Americana represent.

L.A. Weekly accomplished what they wanted to accomplish, which was to get people to click, and talk about it. This very article, and others that may proceed it only helps their cause. So they win, and all of these artists lose, especially someone like Jack Grelle, who is small enough that when folks go to Google his name for the next few months, they’re going to find themselves on this L.A. Weekly article as opposed to a feature on him in No Depression. It sucks for Sam Outlaw, who yeah, may have taken his mother’s maiden name for his stage name, but just had a child, and is trying to support a young family through music.

To Jason Isbell, Gillian Welch, Lucinda Williams, or even someone like The Devil Makes Three, this article will be a popcorn fart compared to their legacy. But to others, it will be a blemish from the biggest periodical that’s ever written about them. Yes, Saving Country Music criticizes artists as well. Just today Thomas Rhett’s stage presence was compared to that of a cinder block. But this won’t materially influence Thomas Rhett’s ability to support his family, and it’s presented in the context of music as opposed to a list with a slanted perspective and agenda.

The worst part about this entire episode might be that one of the legacy outlets of American independent music—that being the Voice Media Group (formerly The Village Voice), which owns L.A. Weekly and other alternative newsweekly rags—has succumb to these awful clickbait stories, and has become an enemy as opposed to a champion of independent art. This includes The Dallas Observer, which recently asserted that Merle Haggard didn’t want country music to be saved, and that Sturgill Simpson never considered his music country, and once predicted the death of Justin Townes Earle. This includes The Houston Press whose posted stupid stories attacking the fictitious Wheeler Walker Jr. for misogyny, and other embarrassing episodes.

In the world of ad blockers and viral content farms, independent music journalism must succumb to clickbait to survive. If you do go to the L.A. Weekly site, you will immediately be bombarded with an autonomous popup ad in a new browser window, and a full-page click-thru ad before you can even get to the actual article, which itself is flanked and bisected with intrusive advertising. Then the article is divided on two separate pages to double the amount of clicks registered on the site to drive up additional ad revenue. It’s also worth pointing out that Voice Media Group helped launch backpage.com, which according to a Senate committee, knowingly facilitated prostitution and child sex trafficking. Though the two businesses are now separate, it shows the “click at all costs” attitude at the heart of these outlets.

Websites so heavily-loaded with ads damage internet equilibrium by encouraging readers to download even heavier ad blockers, robbing other sites (like Saving Country Music) that have sworn to keep the reading space clean of ads from important ad revenue, causing an arms race where sites keep having to add more ads, while readers continue to get bigger ad blockers to counter them. This is one of the reasons so many of your favorite music blogs have disappeared recently.

There is no winner to this Jonny Whiteside, L.A. Weekly article. Even the click boost L.A. Weekly will receive will be short-lived, while the business model for the American alternative-newsweekly still remains unsound, and now robbed of angry Americana readers. All the more reason to adhere to a few simple principles of responsible journalism in hopes the tide will shift in an era when people are more and more seeking out truth and responsible content.

Ironically, just like all lists, L.A. Weekly uses the star power of the artists named in their “10 Lamest Americana Acts” to promote themselves, no different than Rolling Stone Country and others do in lists of artists with a more positive slant. Lame or not, these Americana artists are important enough to garner a strong reaction from the public and cause a viral episode. And the legacy of many, if not all of the artists listed by Jonny Whiteside, are very likely to outlast outlets like L.A. Weekly, or Saving Country Music for that matter. Because ultimately it’s all about the music, and that was what was lost on L.A. Weekly.