The good news is that country music legend Loretta Lynn is doing fine after a recently experiencing a short stomach flu, and having to be hospitalized briefly, forcing her to miss the CMT Artists of the Year event on Wednesday (10-17) where she was scheduled to receive a Lifetime Achievement Award. The bad news is that a string of fake news stories have made it across the internet that the 86-year-old’s health has gone through a major setback and that she is in the hospital, citing someone who does not have any intimate knowledge on Loretta Lynn, but just happens to share her last name.

“Well Y’all, leave it to me to go and get sick on the very night all my friends are getting together to honor me at the CMT Award Show as their Artist of a Lifetime,” Loretta Lynn said on social media Wednesday. “I can’t believe that I’m not gonna be there tonight in person, but I am watching and I’m there in spirit!”

That seemed to be the end of it, but then on Saturday afternoon (10-20), gossip site Radar Online posted a story that Loretta Lynn was sent back to the hospital with ‘serious issues,’ citing the source of the information as Michael Lynn. There is a Michael Lynn who did post on Saturday morning,

I am very sad to report this morning that the Queen of Country Music, Ms. Loretta Lynn has had some setbacks in her recovery and is back in the hospital with some serious issues. She needs our prayers right now, and the one thing I do know for sure is that she is a fighter and will not go down easy. PLEASE pray today for her. For official news about her, please read the updates on LORETTA LYNN OFFICIAL.

However Michael Lynn—who also happens to be a musician—was just sharing the news of Loretta’s illness from Wednesday on his Facebook feed. Michael Lynn has no relation to Loretta Lynn whatsoever. But this did not stop multiple major music and entertainment websites from picking up the story, and posting their own articles, also citing Michael Lynn as the source, and naming him as a relative (which he never claimed). This included the largest source for music information in the world—Billboard Magazine—who at the time of posting, has still yet to fully correct their story.

“Fake news story going around from some guy posing to be a family member or posing to be close to family… its fake news. But thank y’all for your prayers mom did have a really horrible stomach flu this last week. She is home and doing nicely recovering. I so wished these news outlets would check their sources before running with gossip.”

Health news about music legends has become big business of online outlets. Fake news about Willie Nelson’s death has become so pervasive over the years, he even wrote a song about it. In the case of Loretta Lynn, major music and entertainment periodicals ran with a story based off of social media assumptions as opposed to fact checking sources.

Screenshots of the fake news (Saving Country Music won’t be linking to them) can be seen below, and were still not corrected as of late Sunday morning, aside from Billboard posting Peggy Lynn’s statement as an update. 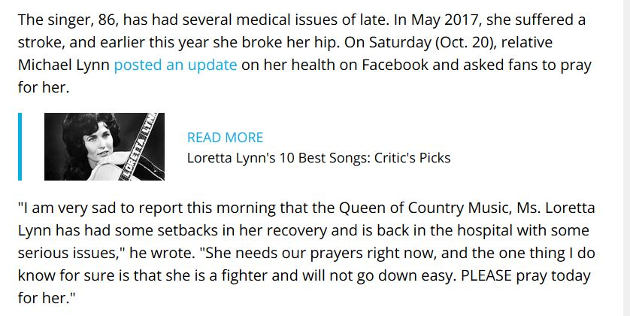 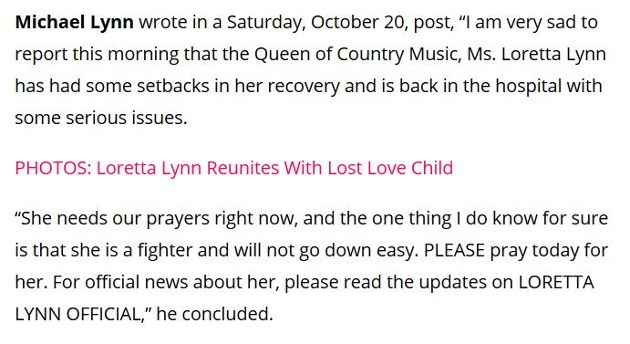