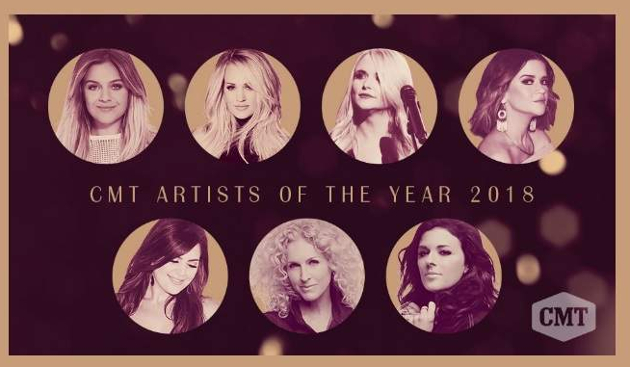 Last Wednesday evening (10-17) saw a historic event take place on CMT as the network’s annual Artists of the Year event featured all women honorees and (mostly) women performers for the first time. Carrie Underwood, Miranda Lambert, Kelsea Ballerini, and Maren Morris were celebrated, as well as Karen Fairchild and Kimberly Schlapman of Little Big Town, and Hillary Scott of Lady Antebellum. Other artists such as Brandi Carlile, Alison Krauss, Sheryl Crow, and the Pistol Annies performed, and Loretta Lynn was given a special tribute, despite not being able to attend due to illness.

CMT’s Artist of the Year is not an awards show per se, it’s more a special presentation aired annually to highlight the most accomplished country music artists in a given year in CMT’s estimation. With the concern over the lack of representation of women in country music lately, as well as the #MeToo movement, featuring the top women of country seemed like the right call for 2018.

Many memorable moments took place on the evening, including Karen Fairchild and Kimberly Schlapman singing with soul legend Gladys Knight on a medley of songs, and Maren Morris and Brandi Carlile performing a tribute to Aretha Franklin. Possibly the moment with the most impact occurred when Karen Fairchild whipped out her phone during her acceptance speech and read off the names of 30+ female artists she believed radio should be playing, many of whom are signed to major labels, but also some independent stars such as Margo Price.

It was a night to honor the women of country music, rally support behind them, and remember the legacy of many of the women who have come before. The problem is, very few people witnessed it.

Ratings for the 2018 CMT Artists of the Year were poor to put it mildly. The program pulled a 0.09 rating with viewers 18 to 49 according to ShowBuzzDaily. That put it in 103rd Place on cable Wednesday evening. This is compared to 2017 when the CMT Artists of the Year presentation pulled a 0.2 share, coming in at #55 in the cable ratings. That means the viewership in 2018 was cut by just over half.

It’s also important to note that 2017’s numbers were the highest in history for the event, and the 2017 presentation came shortly after the Route 91 Harvest massacre, which became the focal point for the event. In 2017, no women were featured on CMT’s Artists of the Year presentation. The 2017 class was Chris Stapleton, Florida Georgia Line, Jason Aldean, Keith Urban and Luke Bryan.

Leslie Fram—the Senior Vice President of Music Strategy at CMT, and one of the leaders of the effort to bring more women into the mainstream country music fold—deserves credit for putting on a memorable and important event. Ratings are not everything, and CMT must have known they were taking a risk with the all woman presentation. But the numbers do illustrate the continued dilemma country music faces to create appeal around the women of the genre when they’re not finding support from radio or tours to help build name recognition or awareness.

Country music’s next major event is the 52nd Annual CMA Awards on November 14th on ABC.