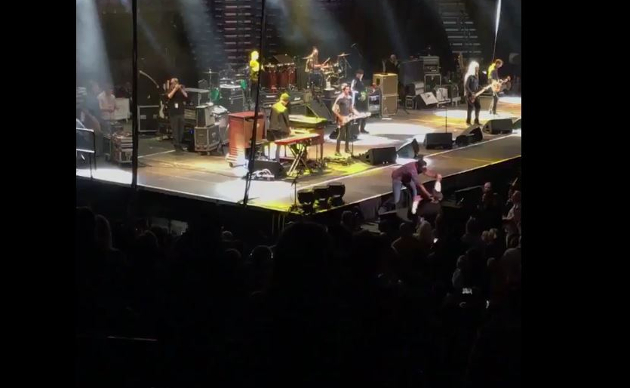 On Wednesday Night (11-30) the big event in Nashville was the annual Charlie Daniels-hosted Volunteer Jam at the Bridgestone Arena that raises money for America’s service members. And being Charlie’s 80th birthday in 2016, the event took on special significance for the Country Music Hall of Famer.

Started in 1974, the Volunteer Jam has always attracted some of the biggest names in country music, and 2016 was no exception, arguably boasting some of the biggest star power ever, including pop country superstar Luke Bryan, along with Chirs Stapleton, Kid Rock, Travis Tritt, and others. Though it seemed like a strange, unintuitive lineup this year, the event was for a good cause, so there was little reason to raise gripes. Unfortunately, the actions of Luke Bryan have sullied the event after numerous videos and eyewitness accounts of Luke Bryan stopping down one of his songs to accost a front row fan and punching him in the face have surfaced.

What exactly caused the altercation is uncertain at this point, but even if words were exchanged, nothing seems to justify physical force upon someone who was not a threat to Bryan on stage. If the fan was being unruly, security should have removed him before Luke Bryan took it into his own hands. Luke Bryan’s “punch” was pretty weak when looking at it at closer angles, but nonetheless does not look good coming from the superstar. It’s a bit of a different situation than when Tim McGraw slapped a fan who grabbed onto him a couple of years ago. In this instance, Luke Bryan instigated the contact.

Expect explanations/apologies to be issued posthaste, and this story will be updated when these things become available. Until then, you can see the incident below for yourself.

***UPDATE 12:00 p.m. CST: A new video has surfaced of the incident showing the altercation from behind Luke Bryan (see below). Also, eyewitnesses say there was a group of individuals heckling Luke Bryan during the concert, including one holding a sign saying “we can see your camel toe” in reference to Luke’s common practice of wearing skinny jeans on stage. Other eyewitness accounts say the individual who Luke Bryan lashed out at was flipping him the bird, but that is not immediately obvious by any of the video at this point.

Luke Bryan’s representatives have been contacted, but have not addressed the incident so far.

A Luke Bryan representative has issued a statement about the incident, but it includes no apology, and no explanation of why Luke Bryan felt the need to initiate physical contact with the individual. Instead, it just basically explains how the incident transpired.

A man in [the] front row was making crude hand gestures toward Luke during his performance. It was insulting not only to him, but more importantly to the men, women and families sitting around him who were there to support and celebrate Charlie Daniels and the efforts of raising money for the military veterans – some of who were in the audience. The concert security personnel saw the man’s disruptive actions of the event and he was escorted out.

S/o to @LukeBryanOnline for handling this jerk & finishing the song 💁🏼💁🏼💁🏼 pic.twitter.com/6p66CQqdGr