Maren Morris Is No “HERO” in Her Debut Album

I had high hopes for this record after hearing Maren’s debut single “My Church” and its references to the old greats of country music set in a distressed-sounding recording like it was pouring out of an old tape deck attached to Montgomery Ward speakers. Those who ventured to listen a little farther than the single and pulled up her previously-released EP would have known that any hope of Maren developing into some sort of vintage-inspired starlet were unfounded. But you thought that maybe she could at least bring something unique and interesting to the mainstream marketplace.

Instead HERO is all about attitude served up with three snaps in a ‘Z’ formation. This is way more Beyoncé than Barbara Mandrell, or even Taylor Swift. Meghan Trainor’s record is more country than this. HERO is simply an urban format album released to the country format because on KISS-FM this shit would never fly. HERO the female equivalent of Sam Hunt’s Montevallo.

It’s all about name dropping Prada and Mercedes, inessential cussing shoehorned in just to help express attitude that hopes to fill in for the lack of creative expression or story to the point where Maren Morris becomes nothing more than an uninteresting country music interloper who isn’t just helping to push the format towards pop, she’s actively severing the ties like a movie character frantically sawing at a rope before the bad guys scale the cliff face and get ’em. 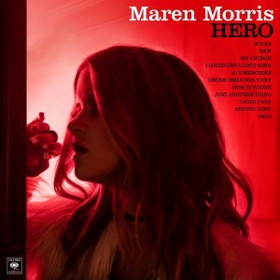 But this is only partially about Maren Morris. It’s also about the producer “busbee” who’s been buzzing around country music for a while now after flunking out of pop, producing songs here and there where he also gets rewarded songwriting credits, and now he’s officially landed his first pet project a la Shane McAnally with Sam Hunt. These pop producers are uninterested in learning about the history and modes of country music. That would take too long, and would require heart. It’s much easier to turn country into pop from the inside out. That way you don’t have to learn a new skillset, and can make seven figures by walking away with songwriting credits for what ostensibly is production work. That’s the current Music Row system that results in a monstrosity like HERO.

One very minor saving grace is that most of this album is recorded with actual instruments and humans playing them. This is the subterfuge it uses to slide under the radar of country gatekeepers, but deconstructed it’s undoubtedly a hip-hop record, built around beats instead of melody, and self-aggrandization instead of story. The few melodies that do exist feel more like extensions of  “nanny nanny boo boo” playground taunts, or are filched from well-established standards, like how Maren Morris’ “Rich” is ripped right from Steve Miller’s “The Joker.” And forget even straining your ear to hear any true country instrumentation because it’s not there.

Songs like “Rich,” the self-centered “80’s Mercedes,” and the swear-laden “Drunk Girls Don’t Cry” evidence the worst that modern “country” music has to offer. No wonder Beyoncé fans want her recent song “Daddy Lessons” to be considered country. Queen Bee might as well get in on the action if these cute little white girls are going to continue to try and cash in on her style.

And don’t cast off all of this criticism as that of an out-of-touch traditionalist just wanting everything to stay the same, because sameness is exactly the problem with Maren Morris and HERO. No matter what radio station or mainstream playlist you pull up, all of the songs sound the same. HERO belongs on the hip-hop channel, but happens to be slotted in country. So no matter what format you pull up, it all sounds the same. Someone please tell me how less choice in any way benefits the modern music consumer? Diversity has been slaughtered not so that artists have more latitude with creative expression so music can “evolve.” It’s all about trying to appeal to the largest audience, and to the demographics seen as the most lucrative to advertisers.

And let’s stop holding up Maren Morris as an example of the surging women of country music that the genre needs. “My Church” maybe, but not HERO. Any positive attention this record gets is attention that any country artist, regardless of gender, deserves more. An album like HERO sets back the cause of expanding the female footprint in country because instead of exemplifying what makes the women of country music so great and unique, it makes them sound like stuck up, attitudinal, materialistic divas who expect the world to service them from their self-righteous pedestal. Don’t mistake this for empowerment. That is why the cause for country’s women needs to focus on the music first, instead of just cheering for certain artists based on their chromosomal makeup. No think pieces on NPR or Salon will make the music of HERO not suck or sound country. We should be putting female country’s best foot forward, including female artists who make country music in a more contemporary style, but that still is country.

HERO is not a complete zero. “My Church” is still a solid single for the mainstream, and “I Could Use a Love Song” and “I Wish I Was” could have worked as passable country songs if it wasn’t for busbee’s production. But like so many mainstream females before her, the labels release singles meant to take critics and traditionalists off guard and endear these new singers to the audience, only to spring the heavily pop-oriented material on you eventually, and usually resulting in a dramatic tapering off of attention as these performers lose what makes them interesting, and become just another pop star trying to make it in the country format.

The Maren Morris experiment started off positively with “My Church,” but she’s no “HERO” with this record as some are touting her. If she wants to save something, she could have saved us all the time and effort by leaving this record on the shelf.