Merle Haggard Says He Was “Nearly Dead” in Pneumonia Scare 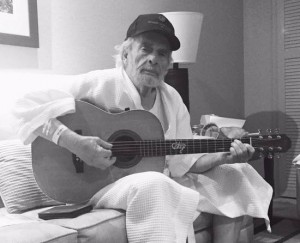 “A couple of weeks ago I came in the hospital here, and I guess I was . . . I guess I was nearly dead. I had a double pneumonia.”

These were the words of Merle Haggard as he called into Willie’s Roadhouse on SiriusXM Thursday (12-17) to let fans know he was doing better, and to thank them for their prayers and support. The 78-year-old first was admitted to the hospital on December 2nd, unable to perform due to the illness. He eventually was forced to cancel the rest of his tour dates throughout December. At the time we knew Merle Had pneumonia, but we are just now learning how serious the illness was.

“They couldn’t tell whether I had Cancer returned or whether I just had pneumonia,” Merle says. “They had to wait until they had the pneumonia under control before we could tell. So it’s been kind of a tough couple of weeks.”

Merle specifically thanked Gene Autry’s widow Jackie for convincing him he needed medical treatment. “Without her I might not be alive. She talked me into coming into this Eisenhower Medical Center out here in the desert and getting some help. And if I hadn’t of done that, I may not be here. We were up here doing a show and I tried to go out and I couldn’t do it, and she talked me into coming into this hospital, and going getting some help.”

Merle also thanked all the doctors and nurses who helped him in his recovery.

You can hear Merle’s entire call below.