Move Over Bro-Country, The “Bra-Country” Revolution Has Begun 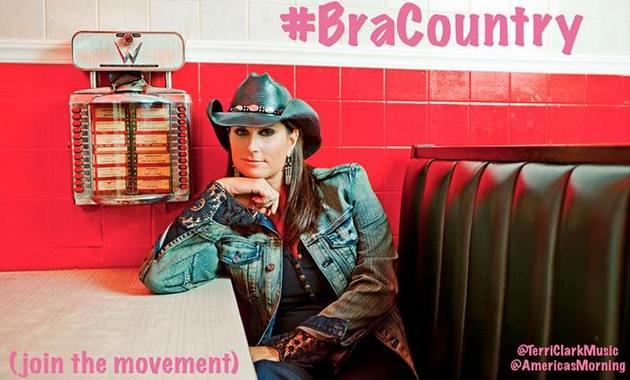 …well at least they’ve got a catchy name. And that’s a start.

In hopes of aligning themselves as the antithesis to the whole “bro-country” phenomenon gripping popular country music with its laundry list, truck and beer, mud-splashed and moonshine-soaked stereotyping, a couple of female artists have decided to adopt the new “bra-country” term to help separate the women from the bros.

The term appears to have originated from Canadian country star and co-host of NASH-FM’s American’s Morning Show Terri Clark. On January 10th, Terri took to her social networks to declare, “I’m starting a movement called ‘Bra Country’….to compete with all of this ‘Bro Country’….c’mon girls !!!,” The proverbial “I’m a woman, hear me roar” moment resonated with many, and bra-country was off and running.

Then bra-country found a champion in crossover star Sheryl Crow, who’s been publicly criticizing the lack of female representation on country radio, causing quite a stir on March 28th when she took to Twitter to vent, “Would someone please play a woman on the radio? Any woman. Doesn’t have to be me but if I hear one more bro country song I’m gonna vomit!”

The outburst apparently caused a rumble Sheryl’s label. “I was in the drop off lane at school,” she explained in a recent interview with KNCI at the ACM Awards. “I take my kids to school every morning. And I’d been listening to the radio from the time we left the house, and then for about another hour, and I didn’t hear any girls. So I just tweeted, ‘Will somebody play a woman?’ And the head of promotions at Warner was like ‘What the ___ are you doing!’

“We had so many more favorable comments,” Sheryl continued. “I mean we had very few people who disagreed. Me and Dierks [Bentley] were talking about it yesterday, ‘Less bro-country and more bra-country.'”

According to a conversation captured by The Tennessean, Sheryl’s bra-country consciousness actually started with an exchange between her and Dierks, completely autonomously from Terri Clark’s Canadian bra-country strain.

“All my good connections are through my wife,” Bentley said. “Cassidy and Sheryl are good bros. It’s not bros, what is it?”

“Bra country,” Dierks replied. “It’s time for it. Oh my gosh. Trademark that and get the URL. Bra country.”