Music Gear Thefts Dealt a Blow After 130 Arrested in Houston 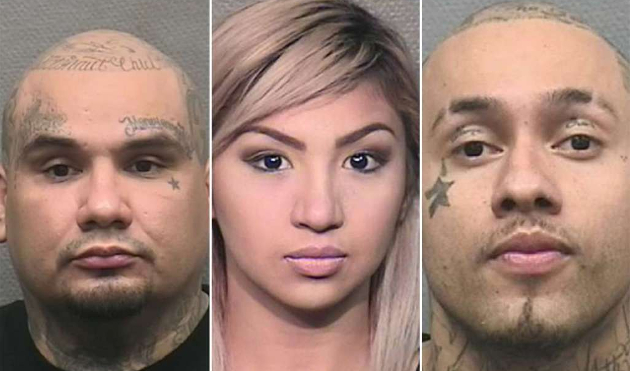 In January, Saving Country Music did an in-depth look at how the City of Houston was becoming the Stolen Music Gear Capital of the World. From high profile cases to small-time thefts, to musicians getting robbed at gunpoint to having their rigs stolen after simply stopping for a bite to eat, the problem for artists touring or based in Houston was so prevalent and the thieves were so bold, it had some artists second guessing even playing in the city.

And now we know why.

On Tuesday (6-28), the Houston Police Department, in conjunction with the nearby Pasadena and Baytown Police Departments and the Department of Homeland Security, arrested 130 people in a massive operation called “Operation Wheels and Deals.” After months of investigations, Houston Police discovered that many of the vehicle and trailer thefts were part of an organized crime ring that patrolled various parts of the city, specifically looking for vehicles pulling trailers—the very scenario most touring bands find themselves in. They would steal the vehicles and trailer, but ditch the vehicles and focus more on the high value contents inside.

How many of the recent thefts involving artists and bands are tied to this specific syndicate of thieves has yet to be determined, but it was specifically the theft of multiple items, including a 100-year-old fiddle from Texas country music artist Zane Williams, that helped police connect the dots to the crime ring that has affected not just musicians, but manufacturers, small business owners, and many other individuals throughout the Houston area, and people traveling through the area.

“HPD’s burglary and theft division, in which I’m the captain over, was investigating a large theft that involved musical equipment for Texas country singer Zane Williams,” says Captain Daryn Edwards of the Houston Police Department. “When recovering his property, they discovered an entire inventory of motorcycle apparel and accessories at this location. This was basically a mom and pop business that had lost their entire inventory. Through zealous investigation, our burglary and theft detective began to suspect a large criminal enterprise that were involved in targeting big ticket items, usually transported via large trailers, in which the trailer and all of its contents were stolen.”

On May 16th of 2015, Zane Williams had his van and trailer stolen in the northwest part of town. Zane and his band were on their way to Galveston when they stopped to eat dinner. When they exited the restaurant, they found the van and trailer missing. But unlike the other incidents, Zane had installed a GPS tracking device in his trailer and was able to follow the assailants on his phone.

The key to the Houston Police Department’s Operation Wheels and Deals was proving that the thefts were part of a greater organization so that criminals could be susceptible to more stringent charges as opposed to being arrested, and ending up back out on the streets months later.

“Analysis revealed that most individuals upon conviction were receiving lesser sentences because of these property crimes than criminals involved in such things as narcotics trafficking,” says Capt. Edwards. “Analysis also revealed that certain communication methodology was utilized in order to facilitate a greater profit margin for this enterprise. Our CID detectives presented our finding to the DA’s office, and showed that this was not an organized crime ring in the traditional sense, but it was mainly criminals working in groups of 10, that were interchanging groups based on their job skills, and the geographical locations of targeted property. Reviews of past sentencing demonstrated that these individual were on average receiving nine months of time, but would only serve about half of that amount. However enhancement of the charge to engaging in organized criminal activity for these individuals would now subject them to a 10 to 15 year prison sentence.”

The 130 arrests have resulted in over 200 charges. 80 of the individuals were arrested by the Houston Police Department, with other police departments and agencies arresting the other individuals. More individuals involved are still under investigation.

“The majority of these individuals have been charged with engaging in organized criminal activity,” says Capt. Edwards. “Other charges include aggravated robbery with a deadly weapon, aggravated assault, felony theft, and retaliation. And to date the amount of property recovered is estimated to be upwards of $2 million dollars. In the course of this past year, this collaborative effort, through cooperation and communication, flexibility and a focused work ethic has led to the dismantling of this criminal enterprise.”

The Black Lillies, fiddle player Ruby Jane, and other bands and music performers have been the victims of theft in Houston over the last few years. But it was the Zane Williams theft that brought a bigger focus on the problem.

“That got our division involved. One of our detectives was involved in that case, and led us to a house, or location where other property was being stored,” says Lt. Mike Osina, who was the head of the operation. “[The criminals] called it ‘shopping.’ They would drive around, all over the greater Houston area, and look for a vehicle with a trailer on it. They would sit on it and see if anybody was going to come to it. If somebody was going inside to eat, they would steal it. They didn’t care about the vehicles, they wanted to contents of the trailer.”

Pawn shops, where many people believe stolen musical equipment and other items end up, were not involved. Most items were sold via word of mouth, and some of the contents were sent to Mexico for sale.

“Thank you, boys in blue,” Zane Williams said via Twitter on Tuesday.