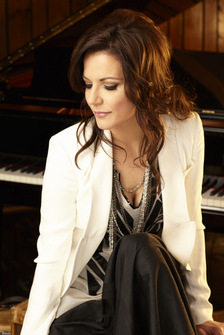 NASH Icon, the partnership between Cumulus Media and Big Machine Label Group meant to give new life to older country stars, has its second signee. Martina McBride, rumored since the beginning of the new imprint to be a possible artist for the label, made it official on Tuesday (12-23) while making an appearance on The Today Show. She was on the show promoting her just released book on cooking and life called Around The Table. Martina joins Reba McEntire as the official artists on the NASH Icon roster.

The McBride signing makes sense for both parties, and was presumed to happen by many when the NASH Icon venture was first announced. Big Machine CEO Scott Borchetta had mentioned Martina McBride specifically in connection with the label, and her 2011 disc Eleven was released through Republic Nashville—a joint venture between Big Machine and Universal Republic. Her last album Everlasting was a collection of soul and Motown covers, and was released independently, leaving McBride with no label affiliation.

There certainly was nothing curious about the Martina McBride signing by NASH Icon, but there is a curious situation brewing between the label and another older star—Ronnie Dunn, formerly of Brooks & Dunn. On November 27th, Dunn took to his Facebook page, where he often posts colorful and involved missives to his fans about the music business, and specifically its interfacing with older artists like himself, and announced he was NASH Icon’s next signing.

“Got my new company cap yesterday”¦..NASHIcon / NASHChetta / Big Machine. Thanks Narvel, Jim Weatherston, Scott Borchetta,” Dunn wrote with a picture of his sporting the new headgear. Jim Weatherston is the General Manager of NASH Icon, and Narvel Blackstock is an artist manager. The announcement came after weeks of Dunn hinting at the possibility, and it looked legit enough. Dunn even confirmed the news in later Facebook comments. Outlets like Music Row dutifully reported the announcement, though making sure to also point out that nothing official had been announced from Big Machine. Subsequently it’s been a month, and still there’s no official word from the label or NASH Icon that Ronnie Dunn will be a part of the imprint, even though many are taking the signing as a given.

Furthermore, there’s been many opportunities for NASH Icon or Big Machine to confirm the news. On December 1st, the label made a big deal about how Reba McEntire would be honored at the inaugural American Country Countdown awards with the first ever NASH Icon award. Also, there was much fanfare around the announcement that Reba McEntire would be playing a Las Vegas residency as her first move under the label, and that Ronnie Dunn would be partnering back up with Kix Brooks to co-headline the engagement. And still, no word from NASH Icon on Dunn signing with the label.

The situation already was beginning to feel awkward before the Martina McBride signing and official announcement from the Big Machine Label Group. Now it makes it even more curious of why they’re mum on Dunn if he is indeed signed to the label. Could Dunn’s NASH Icon announcement actually do with the Las Vegas residency, and not the label itself? Did Dunn jump the gun, and the deal either hasn’t gone through, or the label’s not ready to announce it? And now that we’ve had another artist signing roll down the hopper, you would have though it would have jarred Ronnie’s announcement loose if it was stuck in the pike. It doesn’t mean Ronnie Dunn isn’t signed to the label confidentially, or that he won’t be signed to it in the future. But at this point, NASH Icon now officially has two artists signed to their roster, and neither one of them is named Ronnie Dunn.

Hank Williams Jr. also stirred rumors he might be headed towards NASH Icon by wearing an “ICON” hat to the ACC Awards, though he’s reportedly been wearing the hat for months. Hank Jr. is also unsigned with a label, and fits in the NASH Icon window.