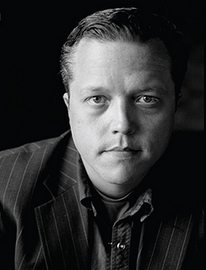 That is apparently the story from an email Isbell received from the producers of the show, but it doesn’t look like the singer and songwriter is falling over himself to accept.

Jason Isbell is the most critically-lauded artist in the Americana music realm at the moment, walking away from September’s awards with Album of the Year, Song of the Year, and Artist of the Year, but apparently NBC’s talent competition The Voice doesn’t believe he’s well known enough yet that the flotsam and jetsam of the American public wouldn’t potentially gobble him up as an undiscovered gem in prime time. After apparently coming across Isbell “online,” the producers felt his prowess in the competition could be at such a degree that they decided to reach out him to participate in industry auditions.

Yes, imagine the irony of Blake Shelton picking Jason Isbell to be “coached” with the help of Taylor Swift on singing, style tips, and choreography.

“I am a talent producer on NBC’s ‘The Voice,'” read the email that Isbell posted partially on his Twitter account. “I came across Jason Isbell online and was hoping to chat with him about auditioning for us if it’s something that interests him? We are getting ready to travel the country and will be having invite only industry auditions (these are not open calls)…”

Apparently Isbell is only entertaining the matter as fodder for humor. “My audition on ‘The Voice’ will be a solo vocal and French horn rendition of ‘Oh Comely’ by Neutral Milk Hotel. I will wear a #bikini,” Isbell tweeted out in response. I would take that as a sign that there’s probably not a good of chance of that happening.

Though it’s a sexy idea of Jason Isbell being featured on what has become America’s biggest singing competition and exposing millions of viewers to the powers of Americana’s most iconic artist at the moment, the idea of the opportunity being effective for either entity is questionable. Though competitions like The Voice receive a lot of attention, their ability to actually launch stars has been called into severe question over the last couple of years. Many times winners tend to sink right back into obscurity after the finale, or fight for attention as middling stars in an industry now stacked with reality show talent vying for attention.

Though you can’t blame producers for trying. Isbell possesses the type of talent that would validate a show like The Voice, and an opportunity like that could be a big moment for Americana. But in the end, if there’s an artist that has ever found his place, it would be Isbell. And if you want a chance to see him on the boob tube, he has a live DVD of his Austin City Limits performance coming out November 24th, and will be featured on the re-airing of the Americana Music Awards via PBS Nov. 22nd on Austin City Limits. Here’s a taste of what Americana has, and what The Voice wish they did: