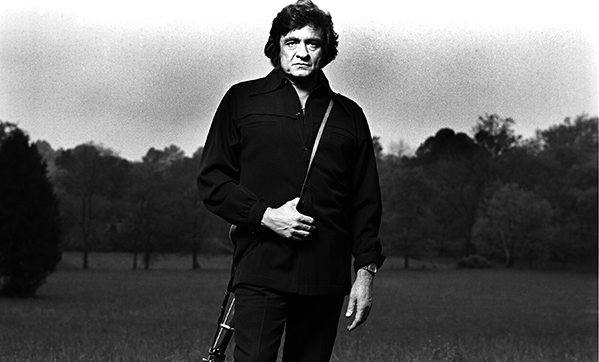 Johnny Cash and his imposing figure will now forever be standing at the foot of 999 S. Cooper Street in his second hometown of Memphis, Tennessee after a new bronze statue in black patina was just unveiled at the location. Based off a 1962 portrait of Johnny Cash by photographer Leigh Wiener, the statue honor’s Johnny Cash’s very first public performance with his backing band the Tennessee Two. Both guitarist Marshall Grant and bass player Luther Perkins joined Johnny to play a Christmas season fundraiser for a women’s Bible study group at the Galloway United Methodist Church, which was the first of many performances that would land The Man in Black in both the Rock ‘n Roll and Country Music Hall of Fame.

Some five years in the making and planning, the life-sized rendition was sculpted by Memphis artist Mike McCarthy. The statue features Cash holding a hollow body guitar at his feet, and at night a “ring of fire” via a circle of lights embedded in the pavement will illuminate the statue. Unveiled on Wednesday, June 12th as church bells tolled in the background, numerous musical dignitaries were there to take it in, including Cash’s nephew, 79-year-old Roy Cash, who was there to witness the original performance at the church.

The entire project cost an estimated $65,000 to complete, and was organized by the nonprofit group Legacy Memphis. The names of major donors are displayed in bricks around the 400-pound statue. It’s now yet another musical landmark for visitors to Memphis to seek out, along with Sun Studios where Johnny Cash’s legacy began in earnest.

The sculptor Mike McCarthy is best known as a cult filmmaker, cartoonist, and preservationist around Memphis. A co-founder of the Legacy Memphis organization, he convinced the group to let him create the statue to help save money compared to a professional sculptor. Previously a plaque at the Galloway United Methodist Church commemorating the event was placed at the church in 2016. Complications on where to put the Cash statue on the church grounds led to it being placed in front of the 25-unit building at 999 S. Cooper Street right near the church.

This is the second time in 2019 that Johnny Cash has been awarded a statue. In April, it was decreed that Johnny Cash’s likeness would be representing his home state of Arkansas in the Capitol’s National Statuary Hall Collection in Washington. Each state gets two statues, and Cash was selected in a yet-to-be created monument. Born in Kingsland, Arkansas and raised in Dyess, Johnny Cash moved to Memphis in 1954 after serving in the military to pursue his musical career, playing that famous first gig later that year near Christmas.

Thanks to the city of Memphis for honoring @johnnycash !! Galloway is the church where Cash and the “Tennessee Two” — guitarist Luther Perkins and bassist Marshall Grant — played for pay for the first time, in 1954